The roof is on fire

Park ‘n’ Play is a perfect example of how to overcome mono-functional parking garages.

Park ‘n’ Play is a new car park situated in Århusgadekvarteret, the first phase of a major development plan for Copenhagen Nordhavn. The neighbourhood is currently under development and will host a mix of new and existing buildings in the future.

The starting point for the competition design was a conventional car park structure. The task was to create an attractive green façade and a concept that would encourage people to use the rooftop. 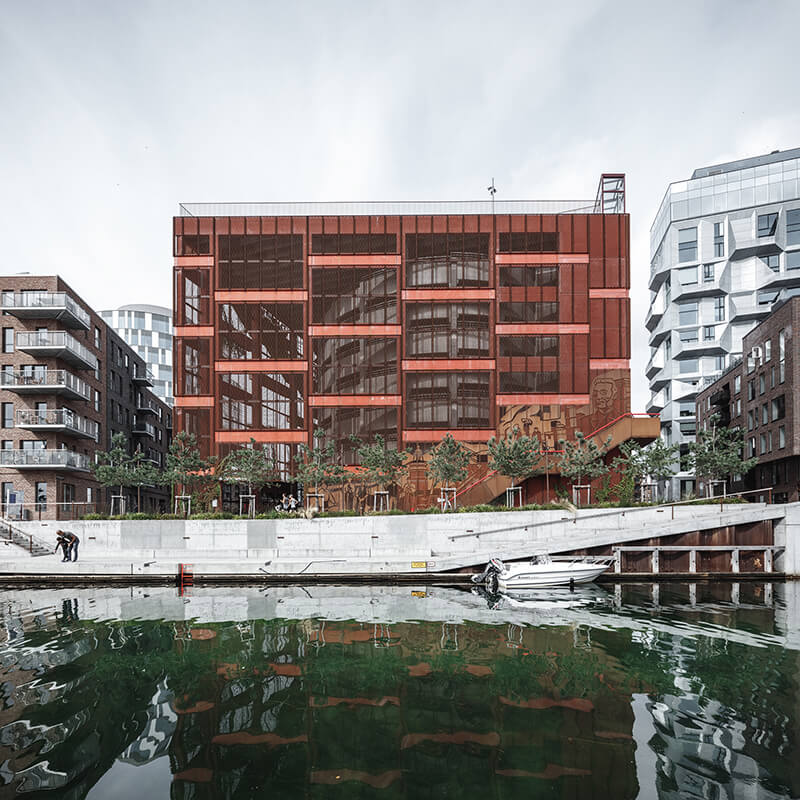 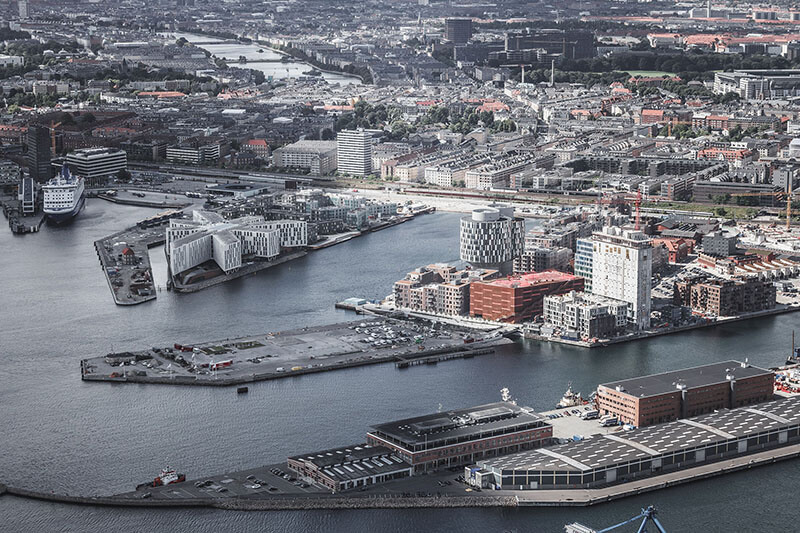 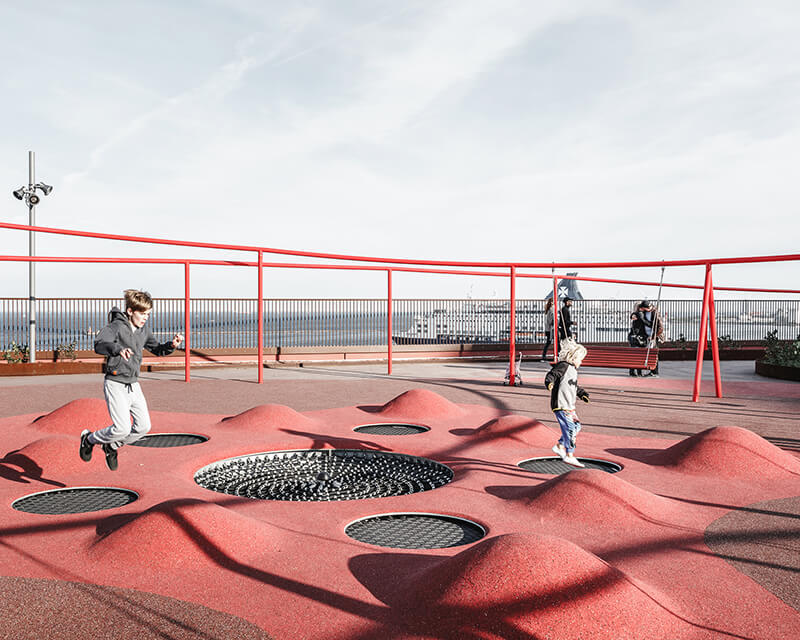 JAJA Architects transform the gray concrete framework into something friendly, which already radiates warmth and harmony through its materiality and surfaces.

Instead of concealing the parking structure, JAJA Architects proposed a concept that enhances the beauty of the structural grid while breaking up the scale of the massive façade. A system of plant boxes is placed in a rhythm relating to the grid, which introduces a new scale while also distributing the greenery across the entire façade.

The grid of plant boxes on the facade is then penetrated by two large public stairs, which have a continuous railing that becomes a fantastic playground on the rooftop. A mere railing is transformed into swings, ball cages, jungle gyms and more. From street level, the railing literally takes the visitors by the hand, invites them on a trip to the rooftop landscape and amazing view of the Copenhagen Harbour. 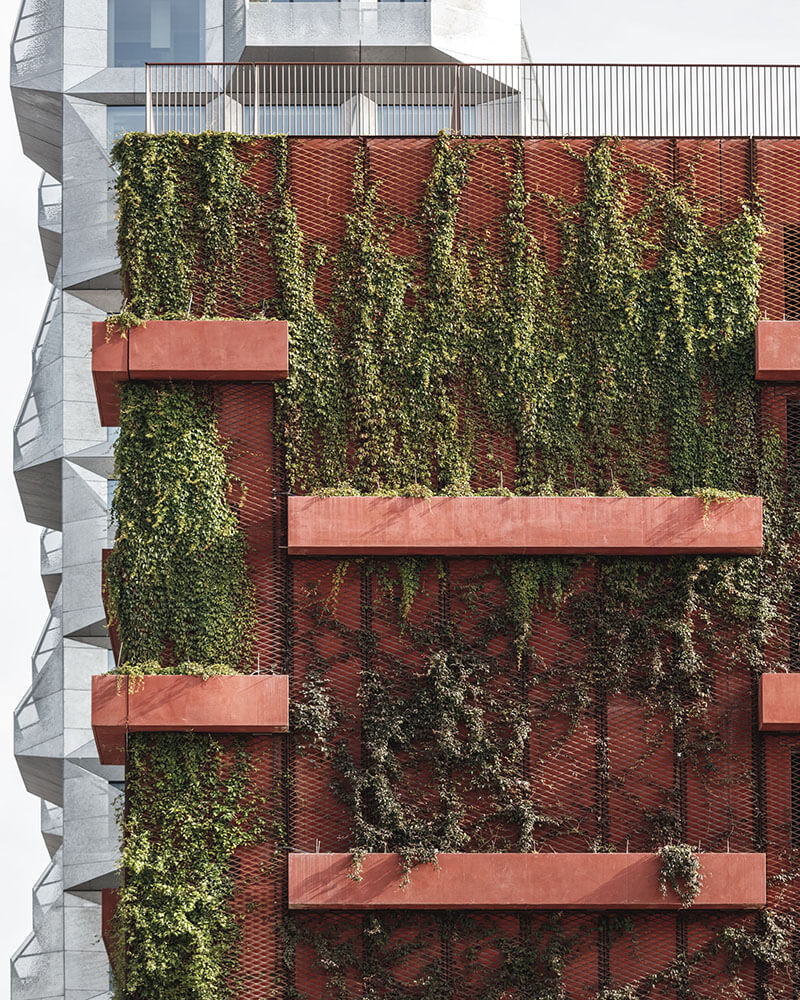 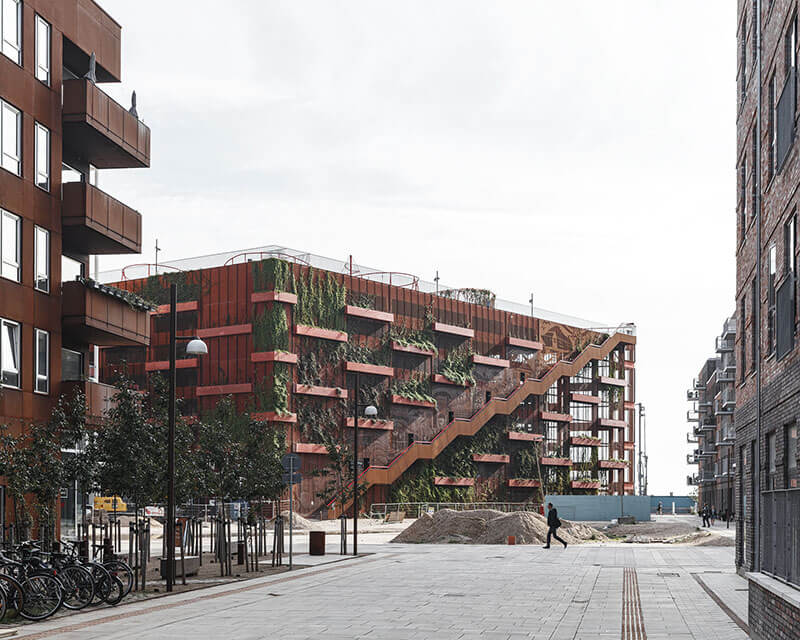 Park ‘n’ Play is based on a standard, pre-defined concrete structure. The traditional concrete parking structure may appear cold and hard. As a natural continuation of the area’s red brick identity, JAJA Architects propose to color the concrete structure red. With this simple measure, the grey frame is transformed into a unique building structure, which radiates warmth and intimacy through its materiality and surface, in harmony with the surroundings that are dominated by red roof tiles and bricks. 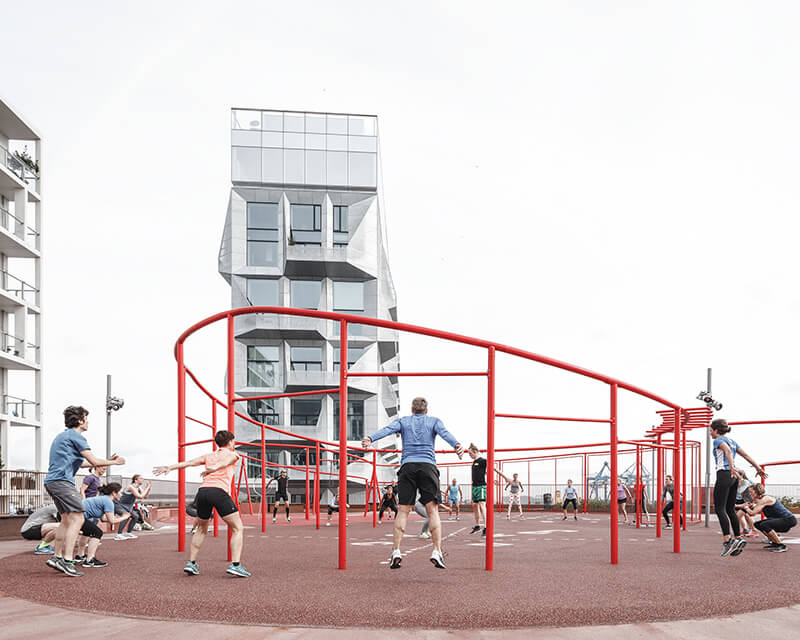 The crucial element of this parking garage is the accessible, playable and recreational roof.

The basic principle of an active car park is the idea of an accessible and recreational roof offered to local inhabitants and visitors alike. Visibility and accessibility are therefore essential when creating a living roof. 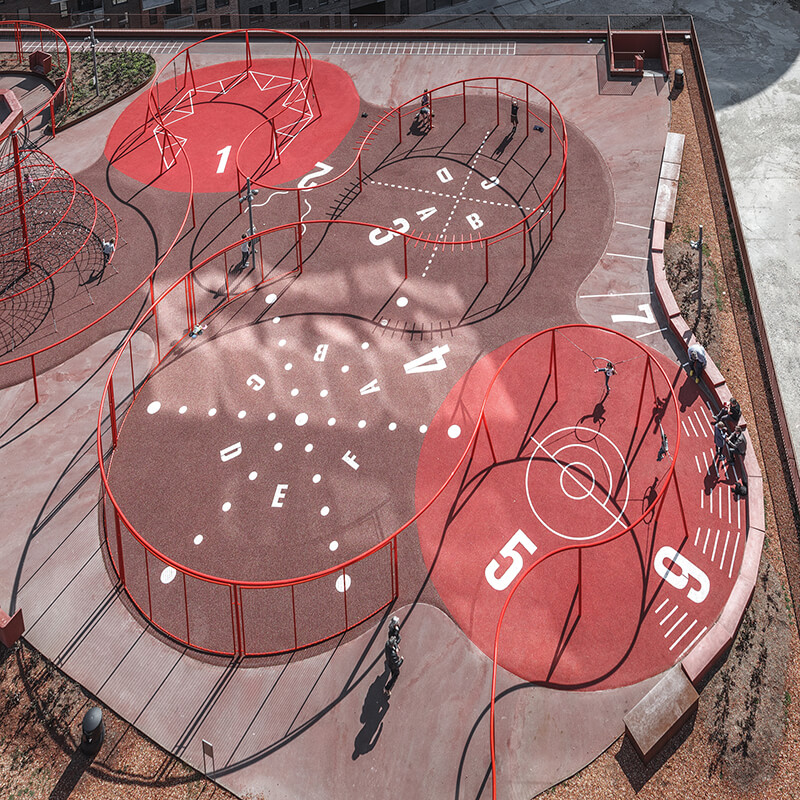 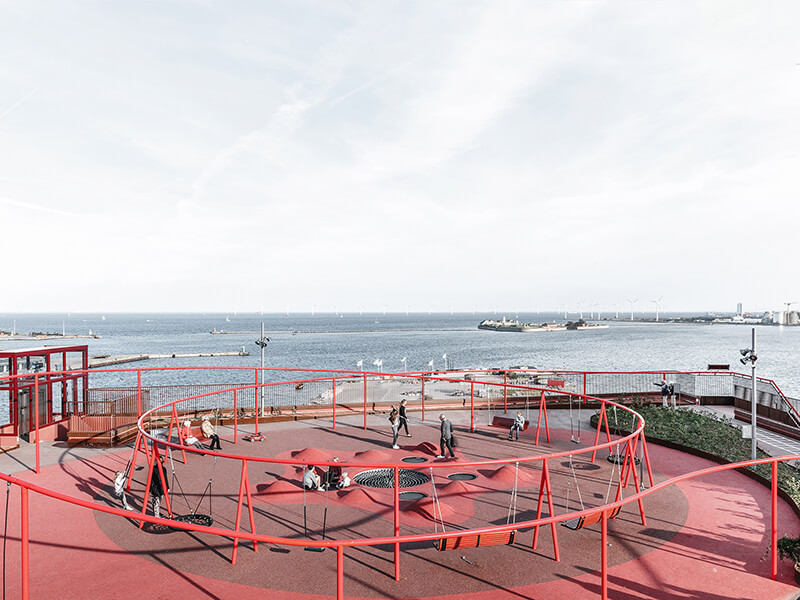 The staircase has references to Centre Pompidou, where the movement along the façade is an experience in itself. Along the back wall of the staircase, JAJA Architects worked with RAMA Studio to create a graphical frieze, which, in an abstract, figurative form conveys the history of the area. 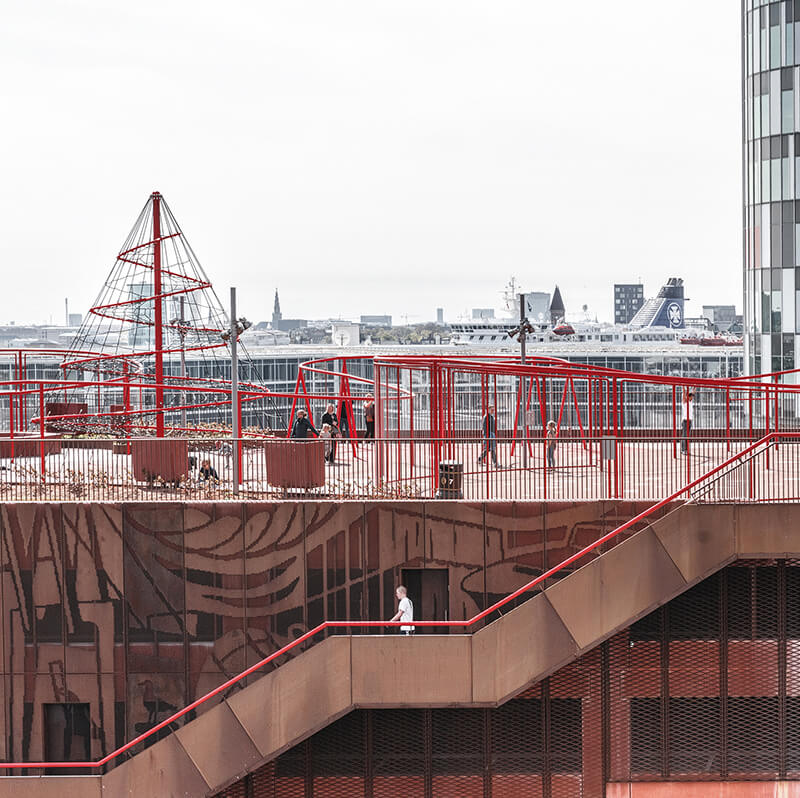 The narrative can be seen from street level, and followed more closely when the visitor ascends along the staircase. Along here, alternative access points to the parking levels are established. The frieze tells a story of past and future, and becomes a modern tale of the area’s industrial history and its future as Copenhagen’s new development by the harbour.

The mix of parking garage, playground and attractive destination makes the project unique.

The red thread is a physical guide through the parking structure’s public spaces, which leads the visitor from street level, where the guide is introduced as a handrail on the staircase. As a sculptural guide it almost literally takes the visitor by the hand, and leads along the stairs to the top of Park ‘n’ Play and through the activity landscape on the roof. 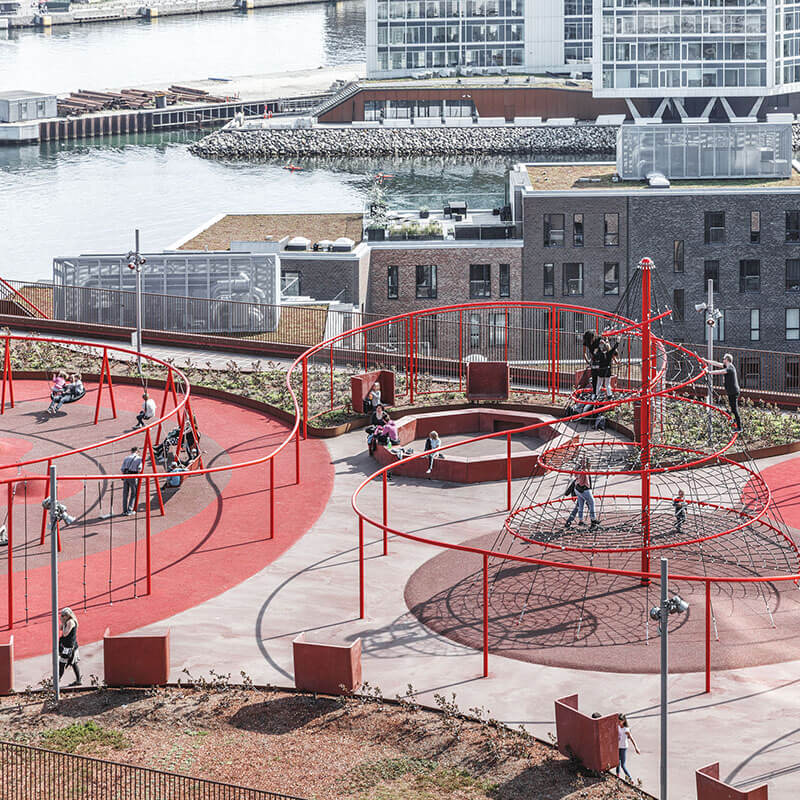 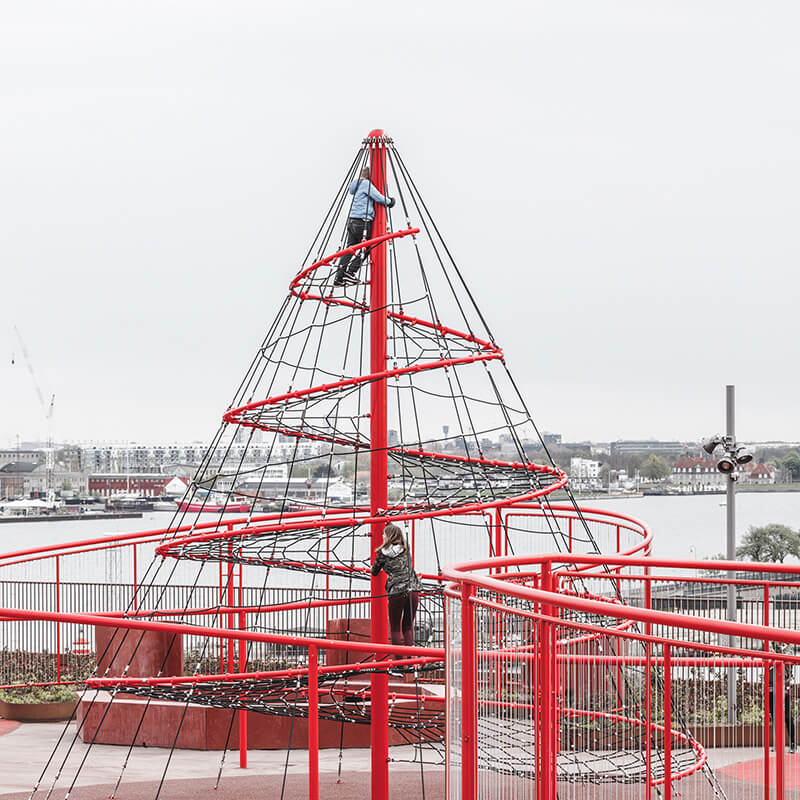 Here, it becomes a sculpture and offers experiences, resting spaces, play areas and spatial diversity. Activities along the red thread are traditional such as swings, climbing sculptures etc., but also more architectural elements such as fencing and plants, which emphasises or establishes spaces while providing shelter from the weather. 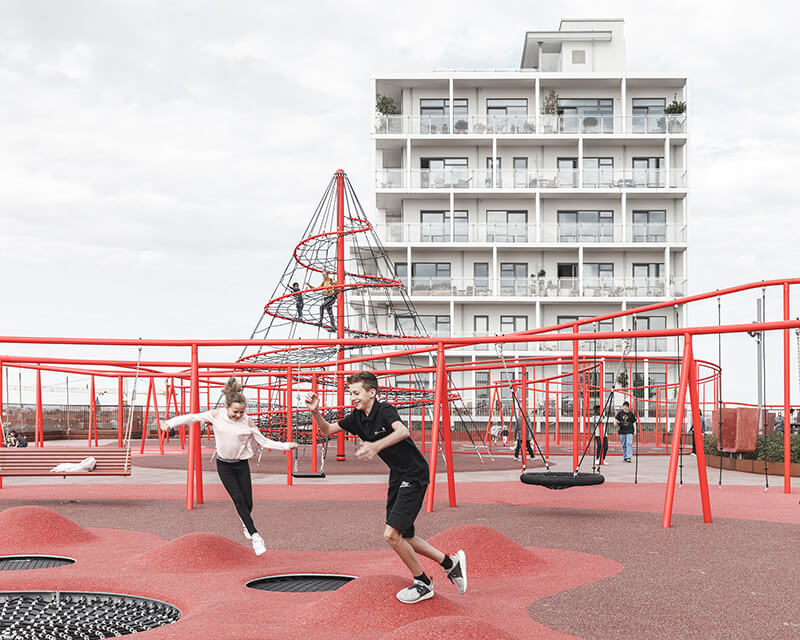 As such the structure becomes a red thread through the project, and connects the façade, the stairs and the activities on the roof as one single element. Copenhagen’s new car park Park ‘n’ Play already is a social meeting ground and an active part of its local environment – as an urban bonus for locals, athletes and visitors alike.

You may have more of this.

How can we be of service to you?