Situated in the cultural heart of northern Thailand, Panyaden International School in Chiang Mai is a green school built from earth and bamboo and is peacefully located among rice fields just 15 minutes’ drive from the city centre. 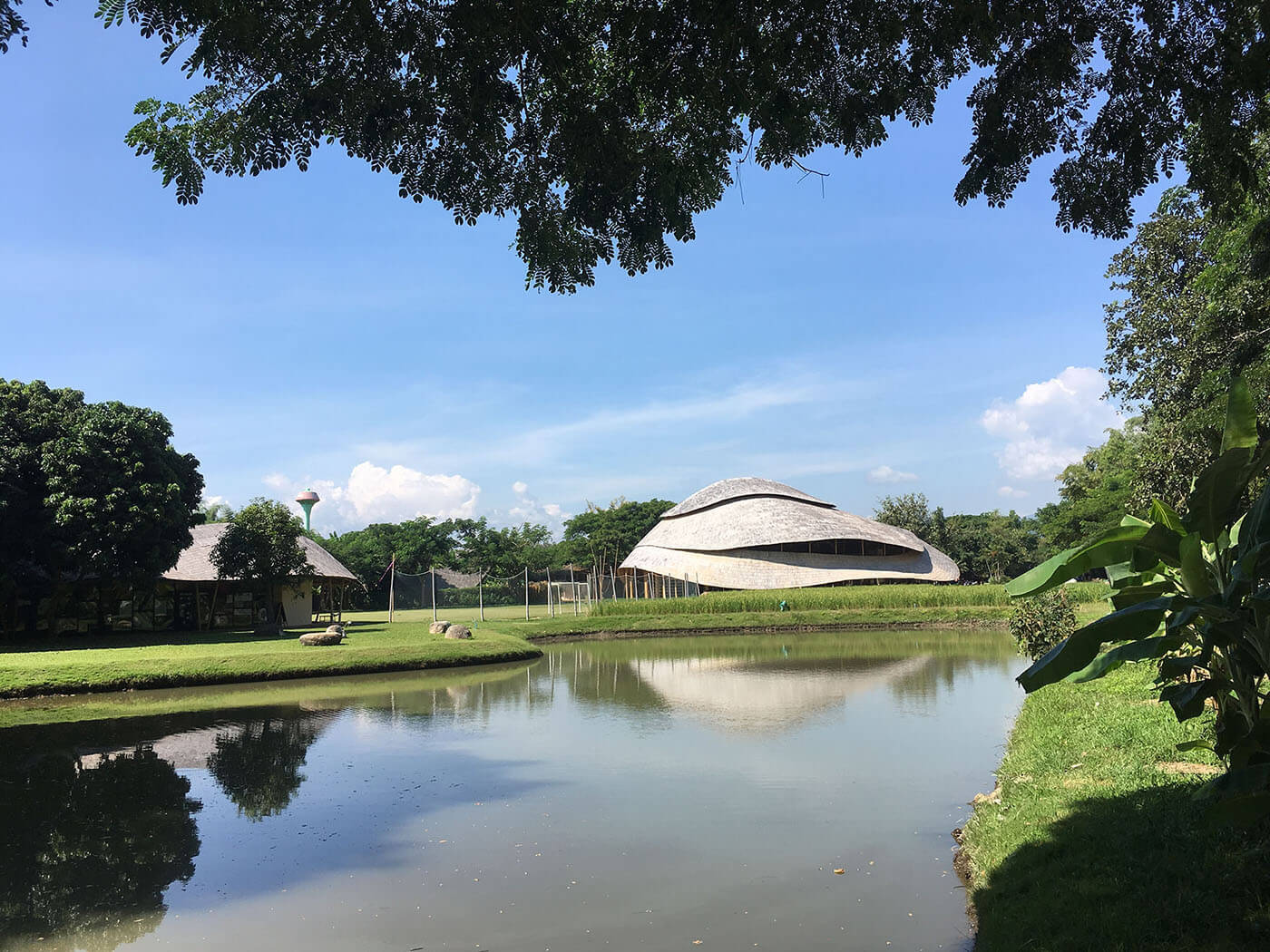 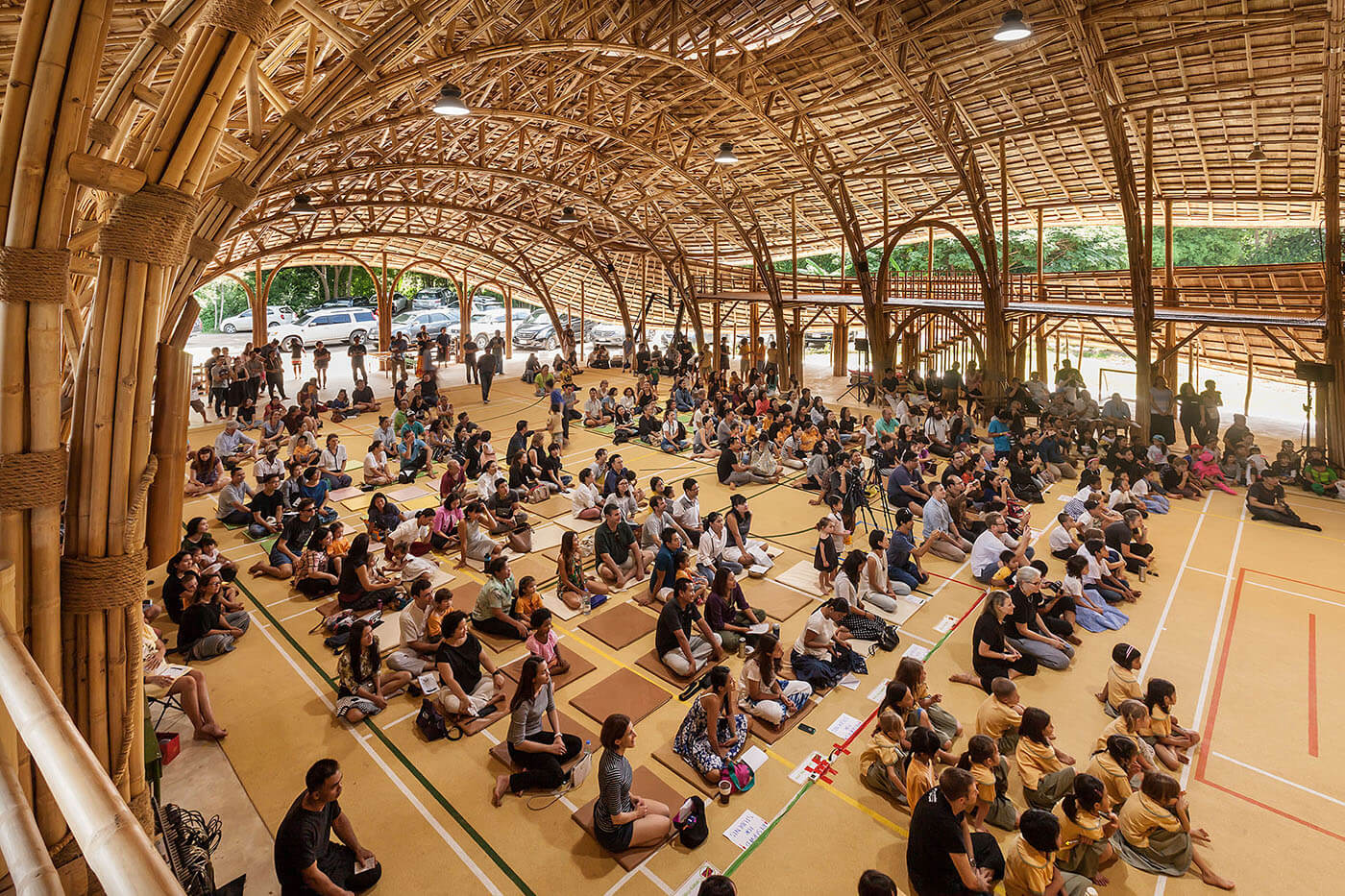 Panyaden International School was founded to deliver a holistic education based on Buddhist principles integrated with a modern curriculum. Students who graduate here “will not only have internationally compatible skills in reading, writing, mathematics and science but also practical life skills such as how to grow vegetables and eat healthily, how to overcome difficulties and social responsibility.” The campus design, by its layout and non-reliance on unnecessary resources or technologies, makes the school simple to use and easy to maintain.

The buildings that make up the school fall into two categories. The classrooms and offices were built with load bearing walls made of rammed earth which carry bamboo roofs, cladding as well as structural elements.

Due to the high thermal mass of rammed earth walls, temperature variations are moderated, thus eliminating the need for air conditioning. The several open pavilions (which are called sala in Thai) that house the assembly hall, the Buddhist chapel, the school canteen, and a covered play area next to the swimming pool, are completely made out of bamboo, also using bamboo set on large boulders of natural stone for the structural supports. 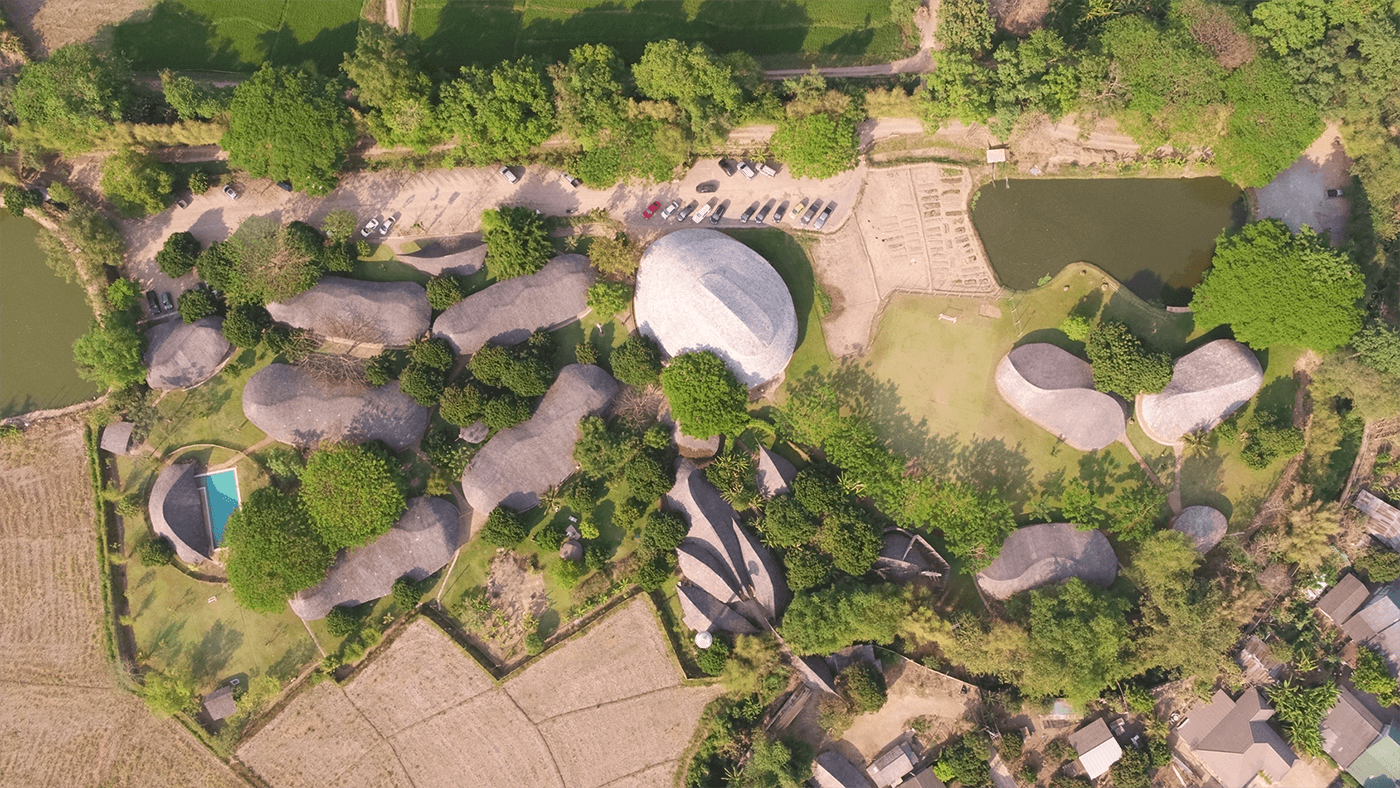 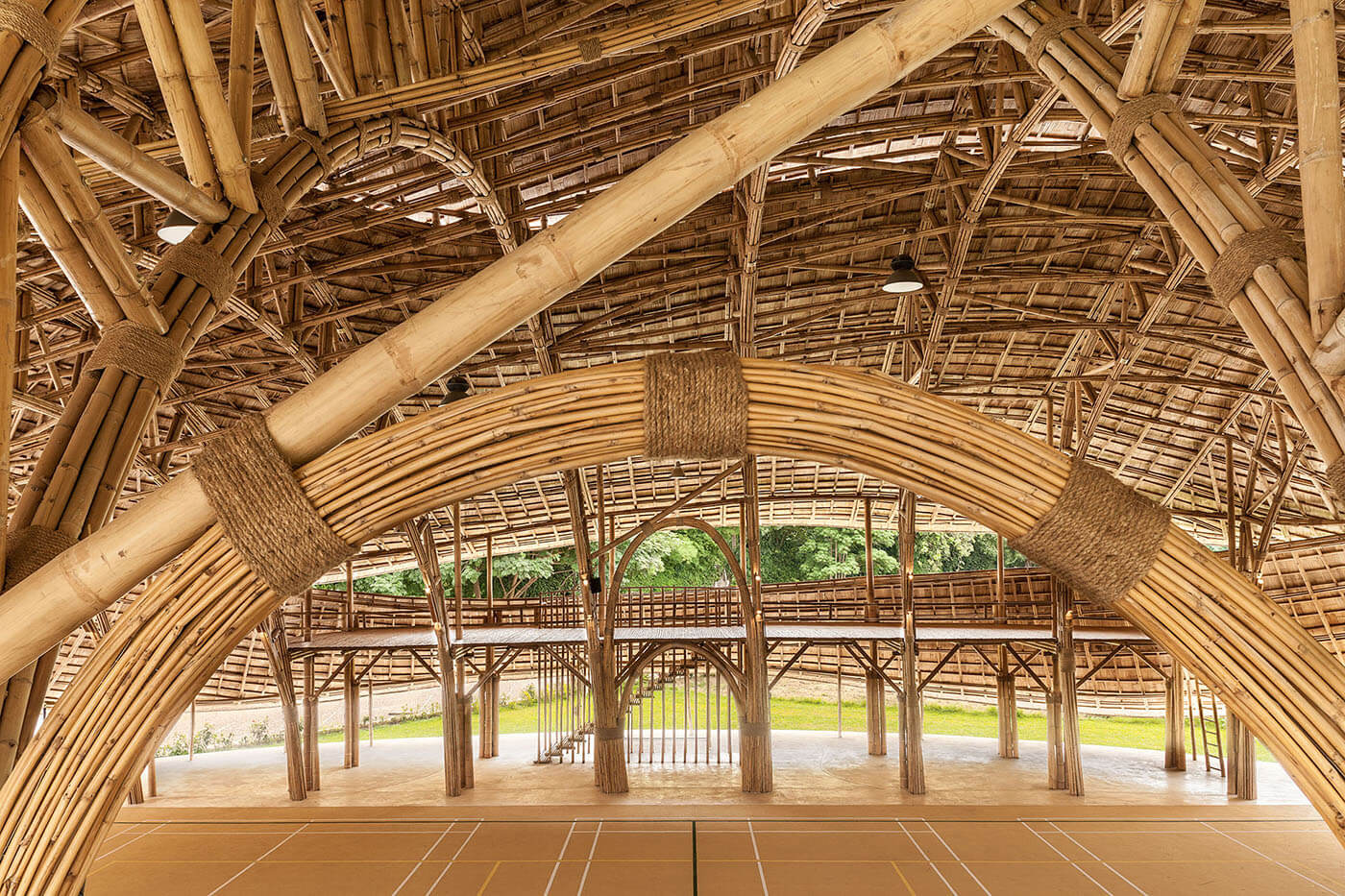 The brief: a smooth integration

The architects brief was to build a sports hall that should be big enough to house the projected capacity of 300 students, but still smoothly integrates with the previous earthen and bamboo buildings of the school as well as the natural hilly landscape of the area. The hall should provide modern sports facilities and only use bamboo to maintain the low carbon footprint and the “Green School” mission of Panyaden.

Bamboo Sports Hal covers an area of 782 m², and hosts futsal, basketball, volleyball and badminton courts, as well as a stage that can be lifted automatically. The backdrop of the stage is the front wall of a storage room for sports and drama equipment. On both long sides balconies provide space for both parents and other visitors to observe sporting events or shows.

Bamboo Sports Hall was designed with the help of two independent engineers for modern safety standards in construction to withstand the local high-speed winds, earthquakes and other natural forces.

The innovative structural design is based on newly developed prefabricated bamboo trusses with a span of over 17 meters without steel reinforcements or connections. These trusses were prebuilt on site and lifted into position with the help of a crane.

Bamboo Sports Hal’s carbon footprint is zero. The bamboo used absorbed carbon to a much higher extent than the carbon emitted during treatment, transport and construction. 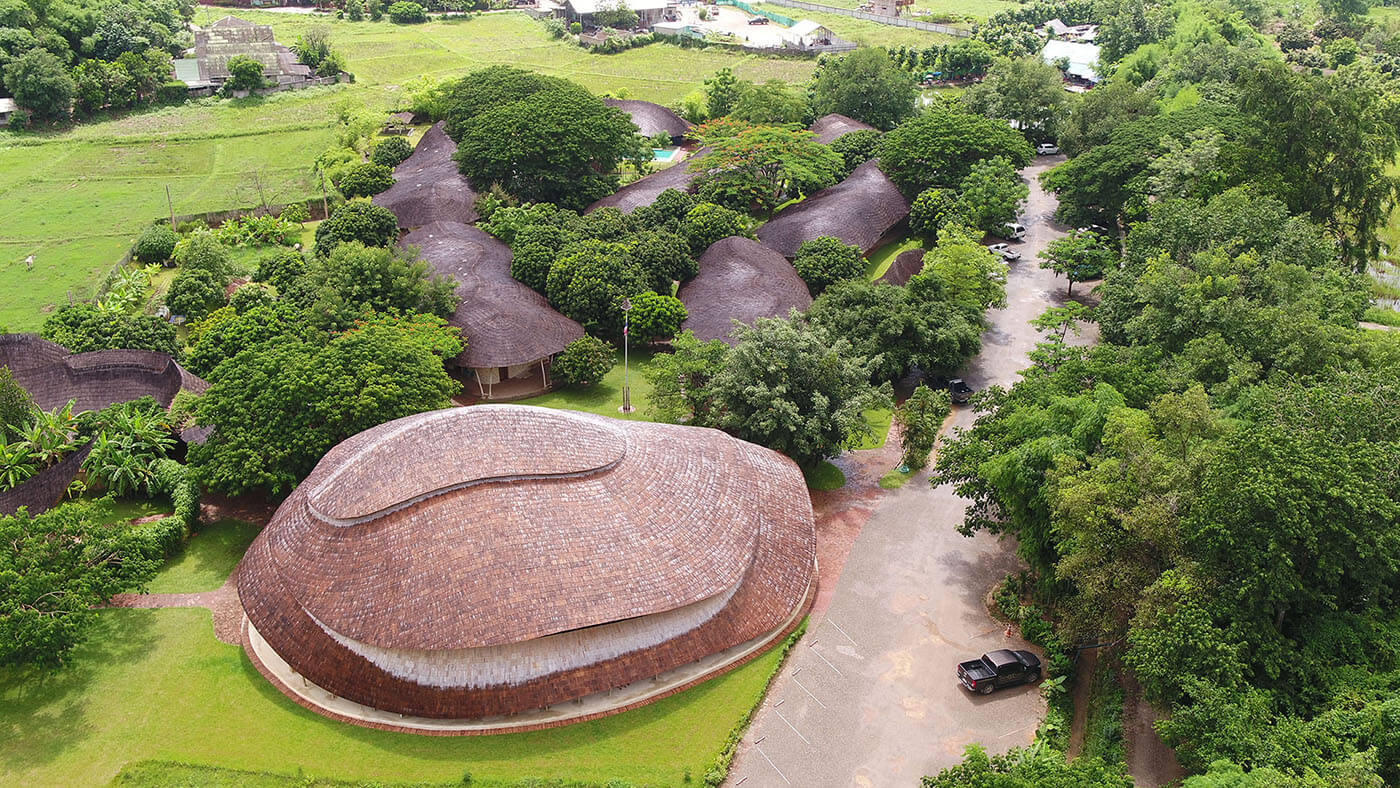 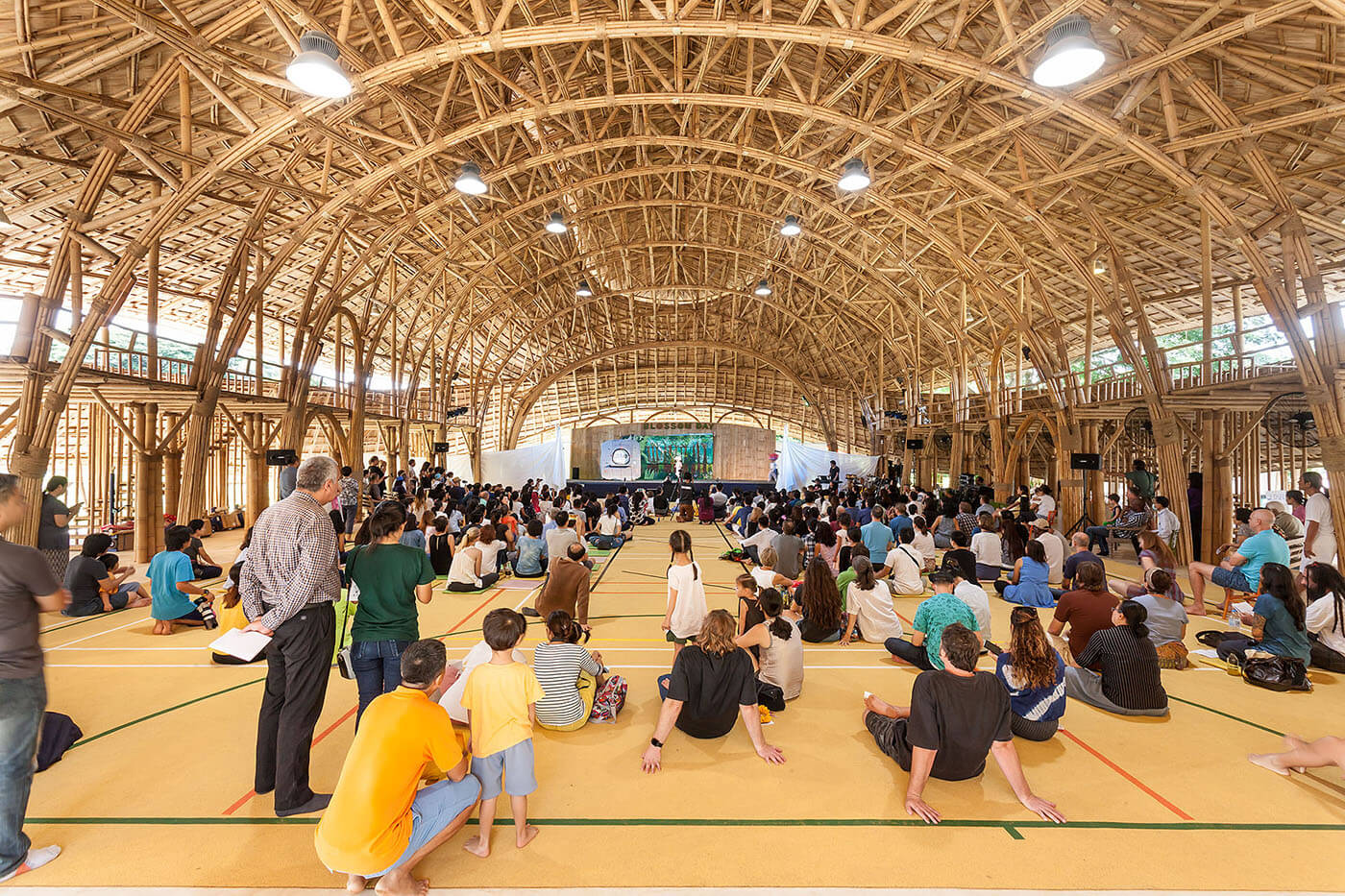 The design and material of Bamboo Sports Hal enable a cool and pleasant climate all year round through natural ventilation and insulation. At the same time, the exposed bamboo structure is a feast to the eye and an example of masterly handicraft.

The bamboo was all well selected for age and treated with borax salt. No toxic chemicals were involved in the treatment process. The life span of the bamboo hall is expected to be at least 50 years. 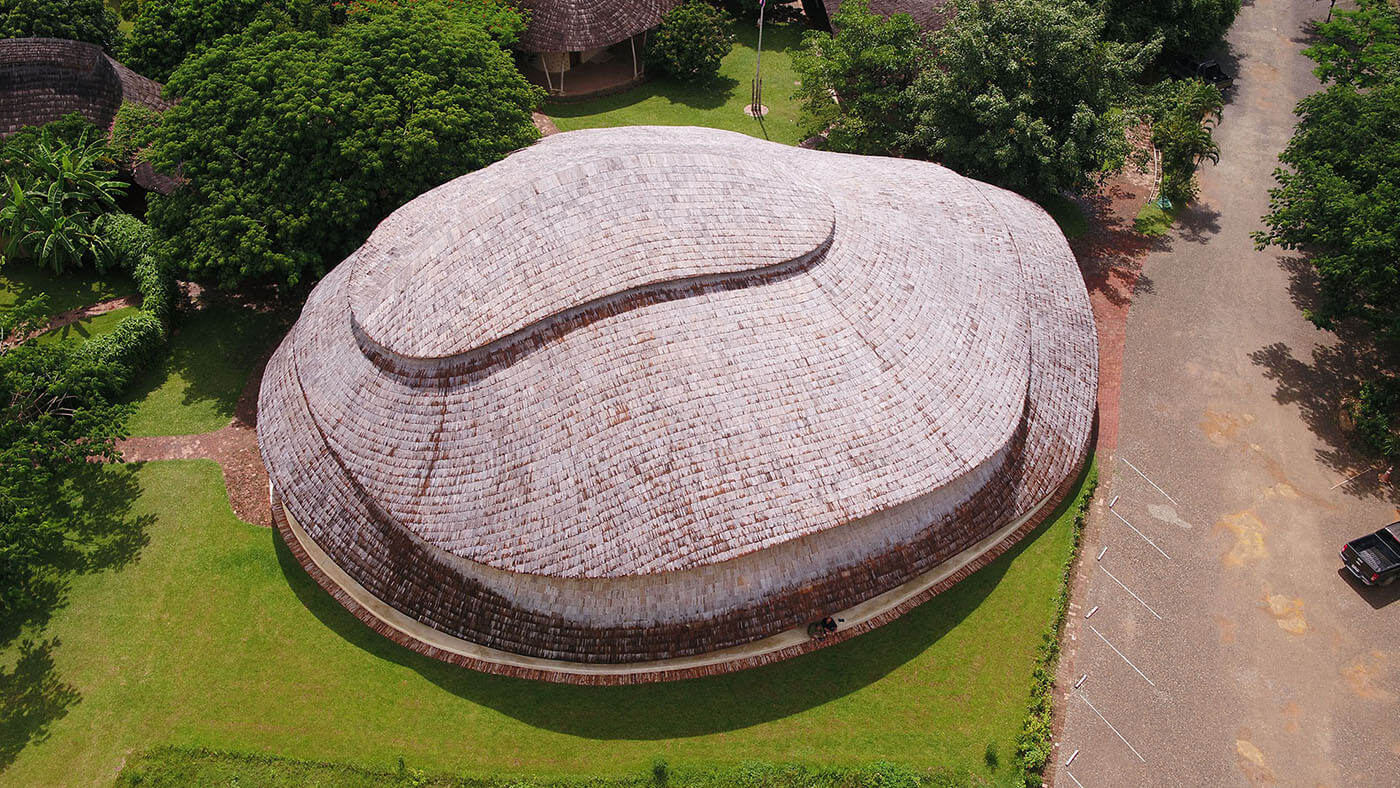 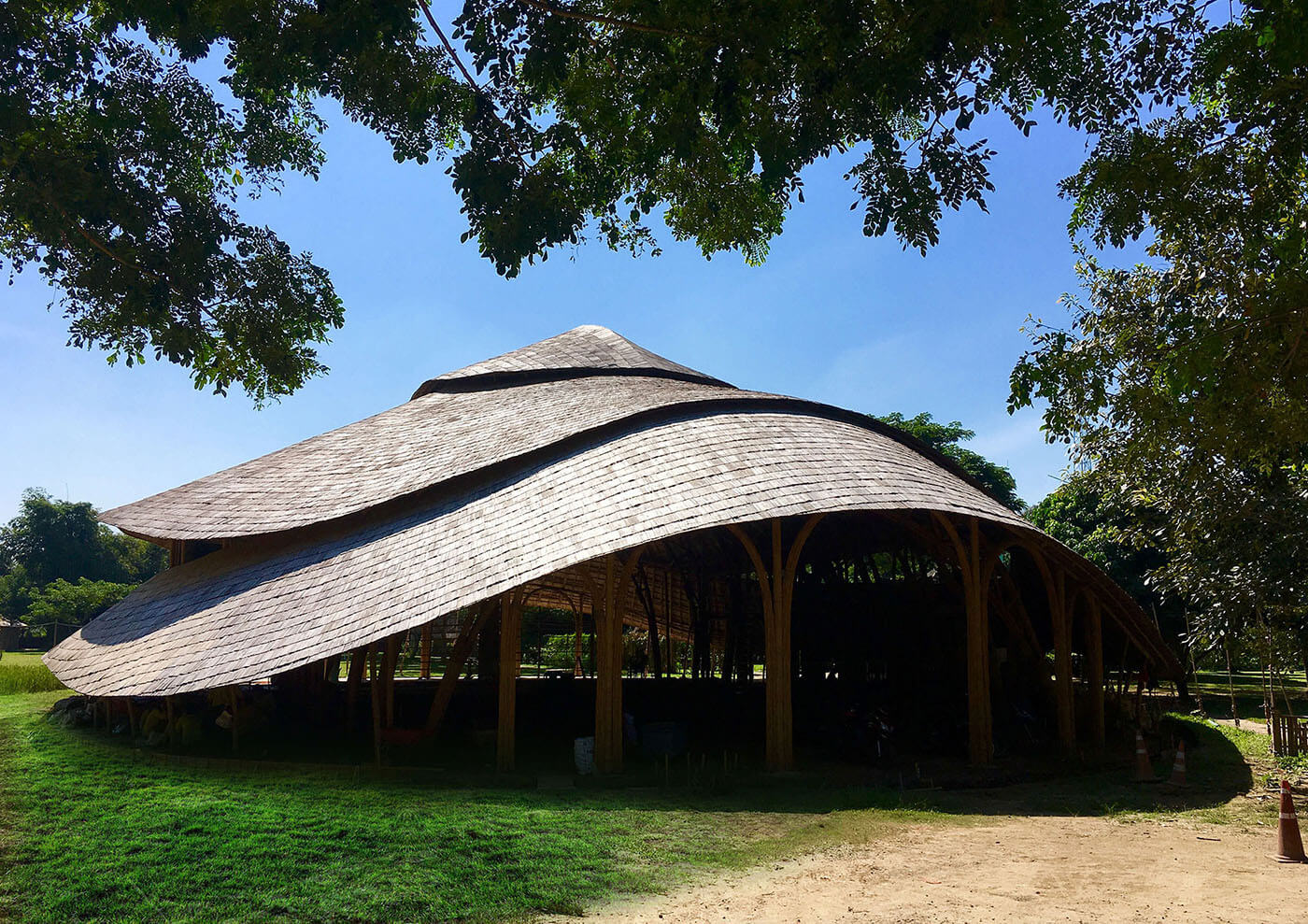 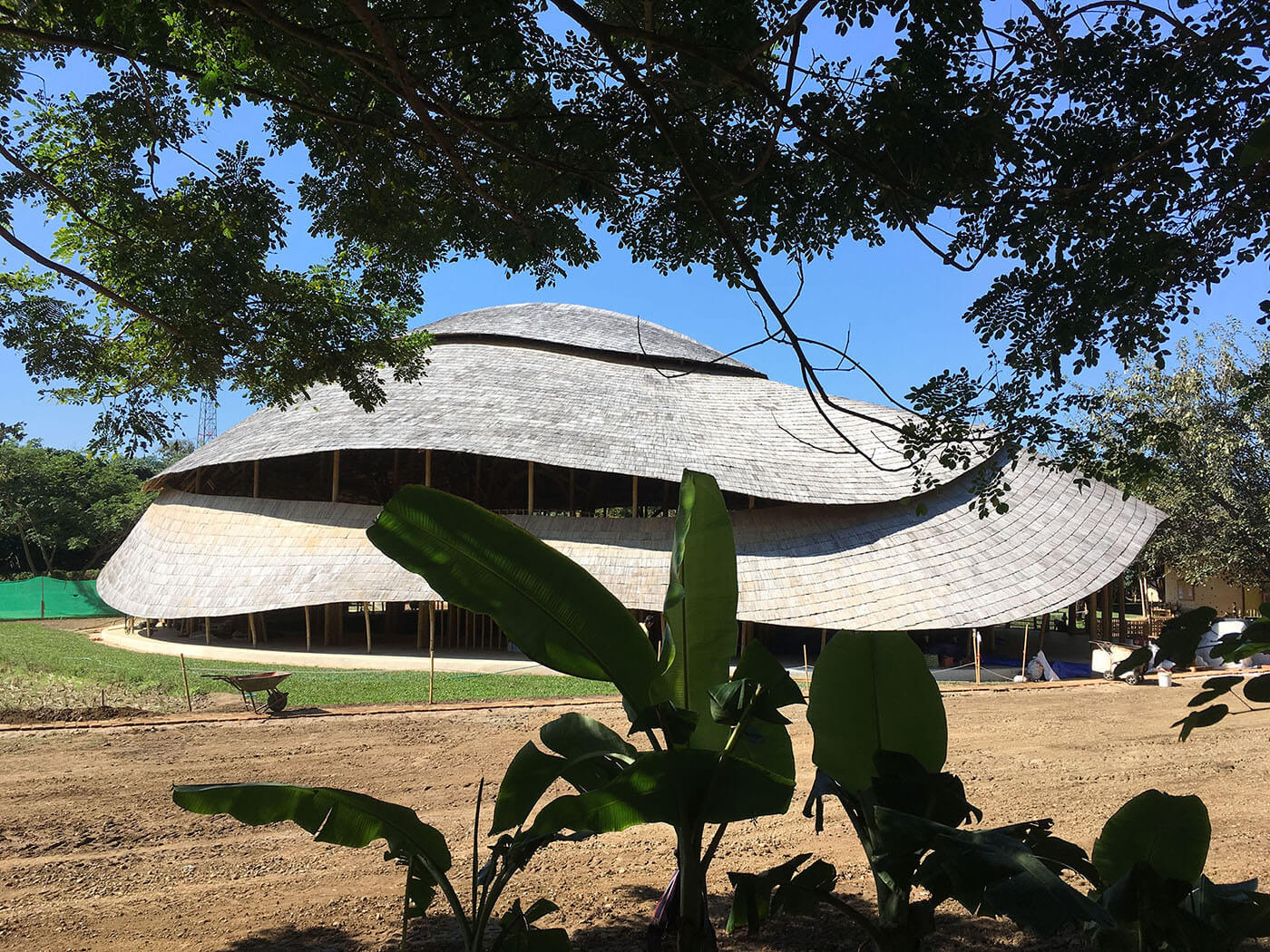 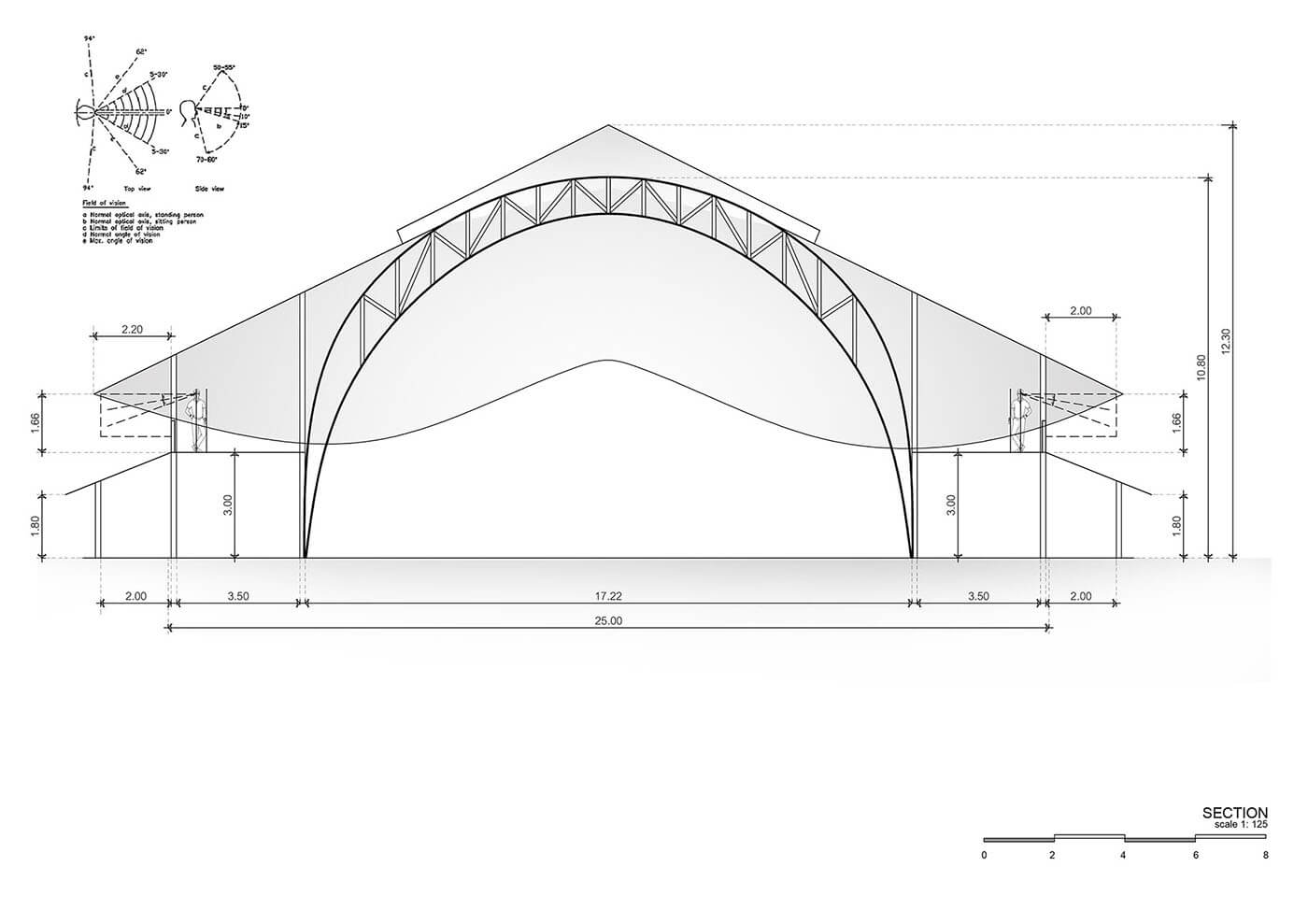 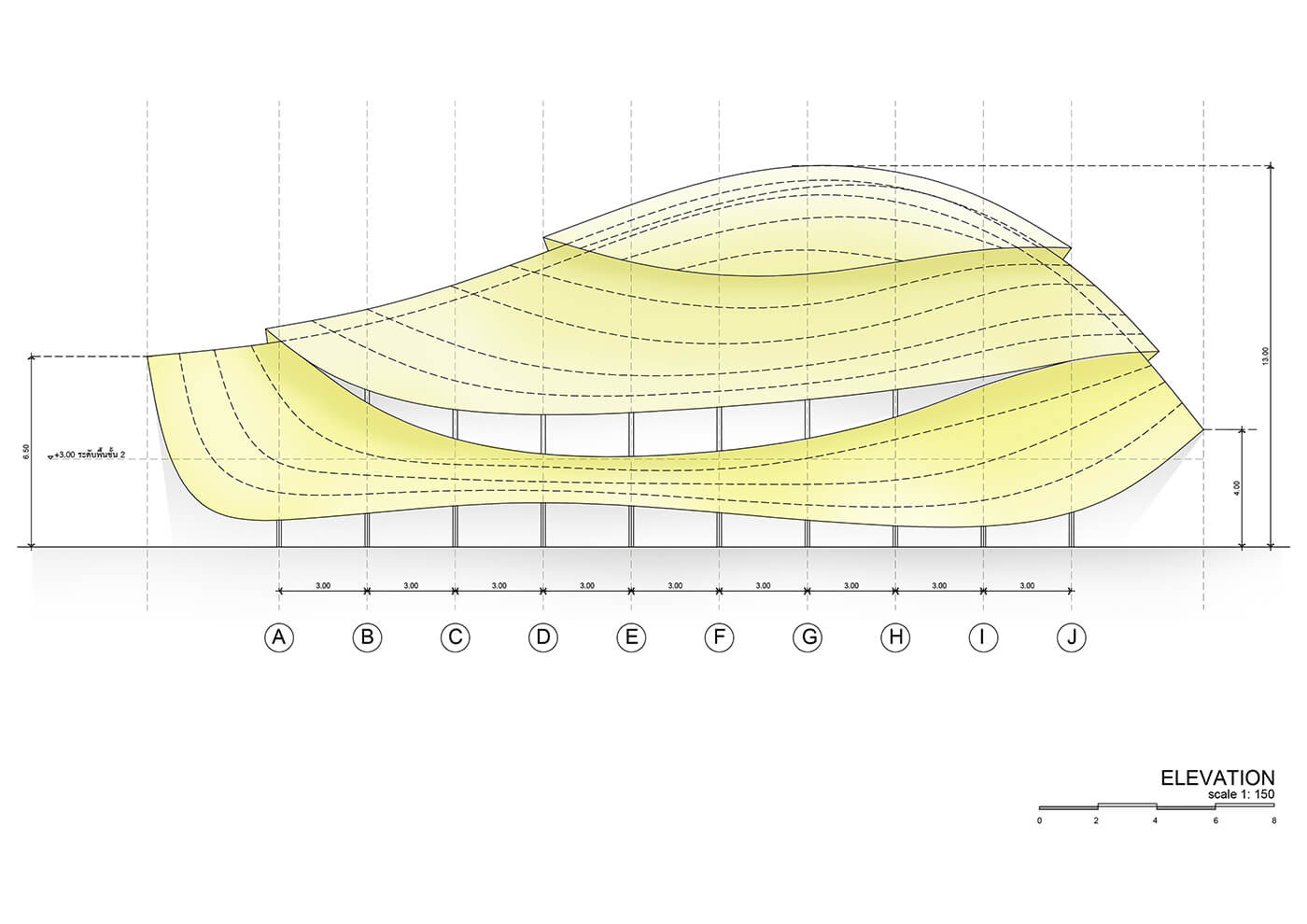 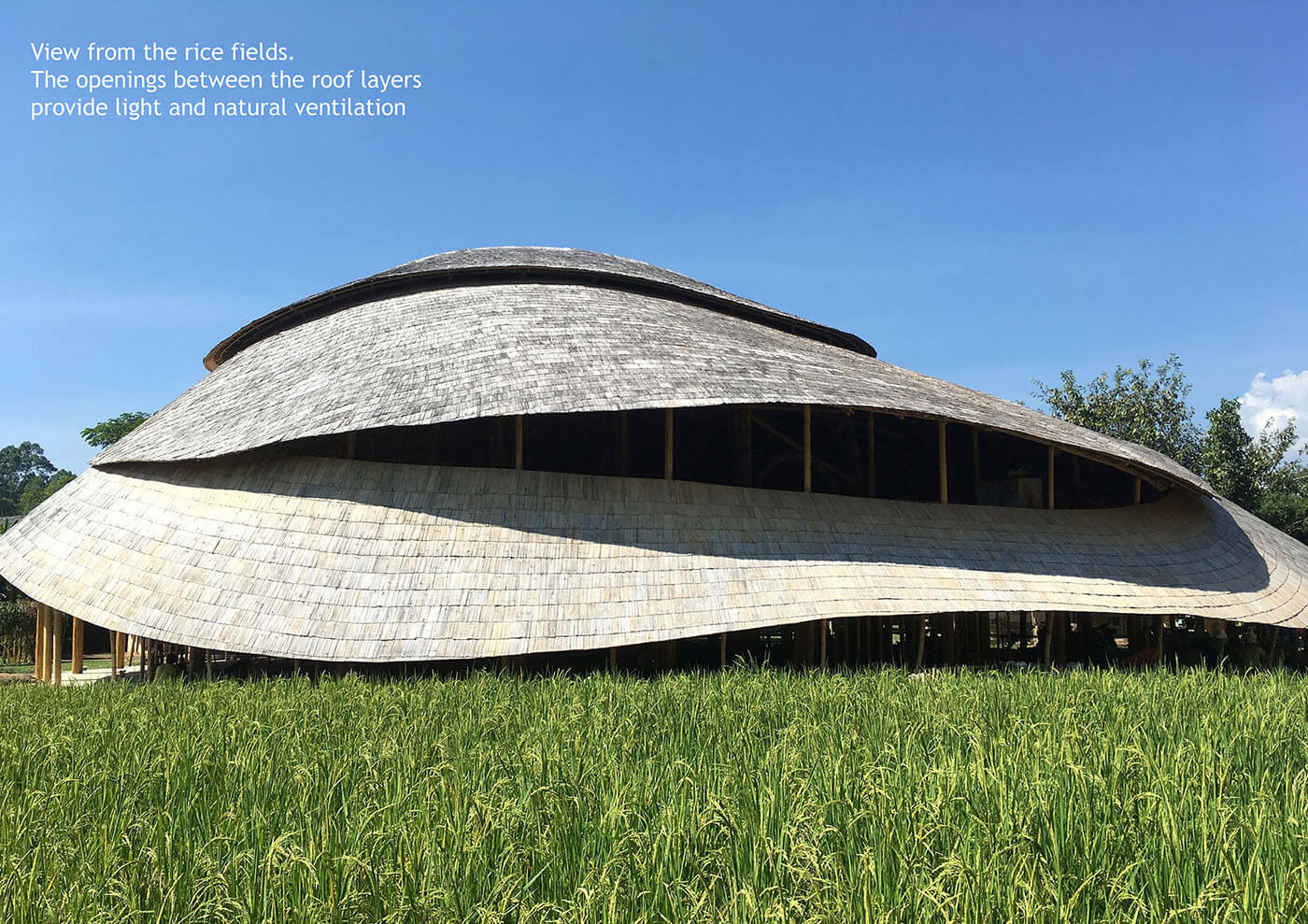 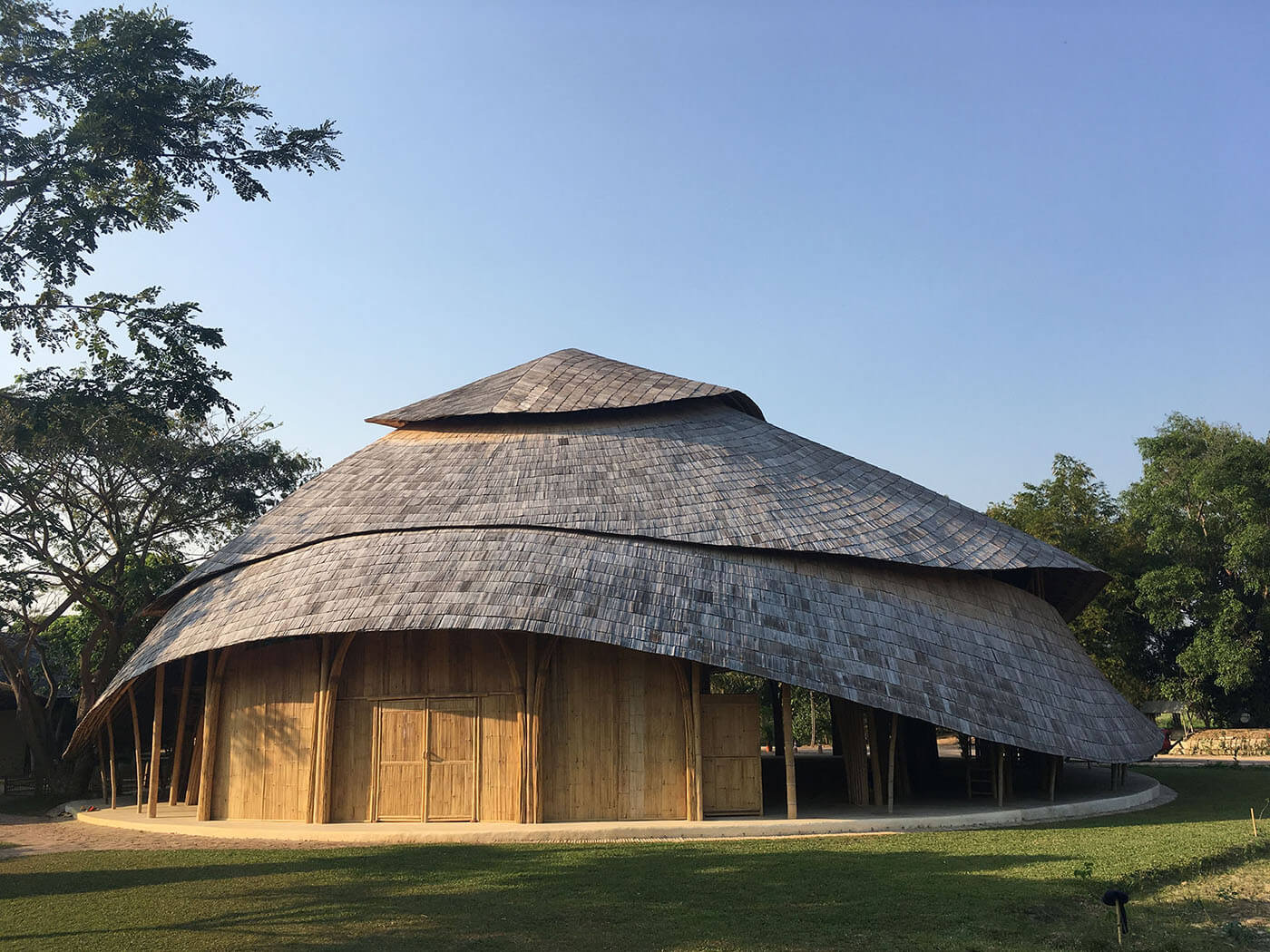 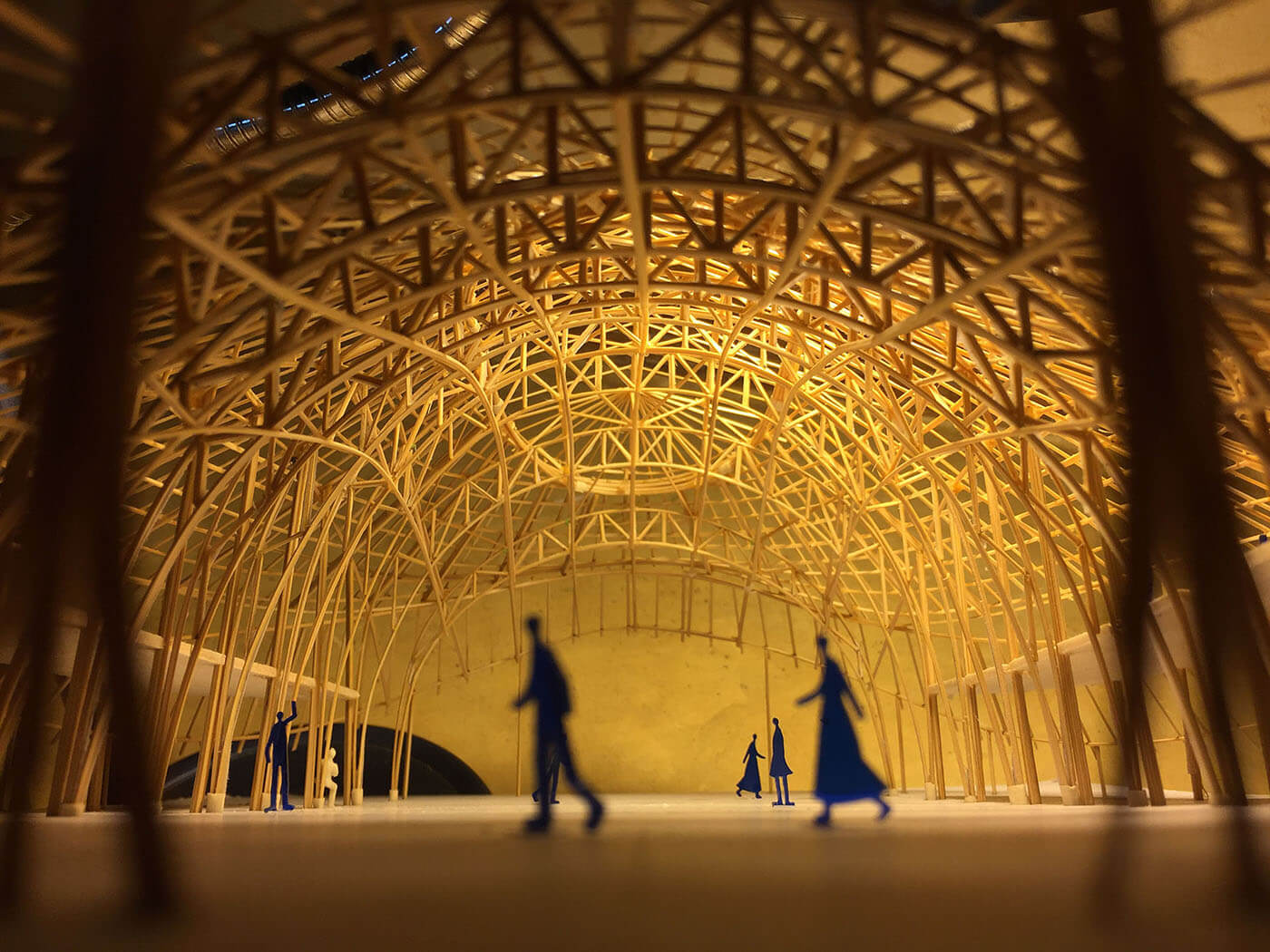 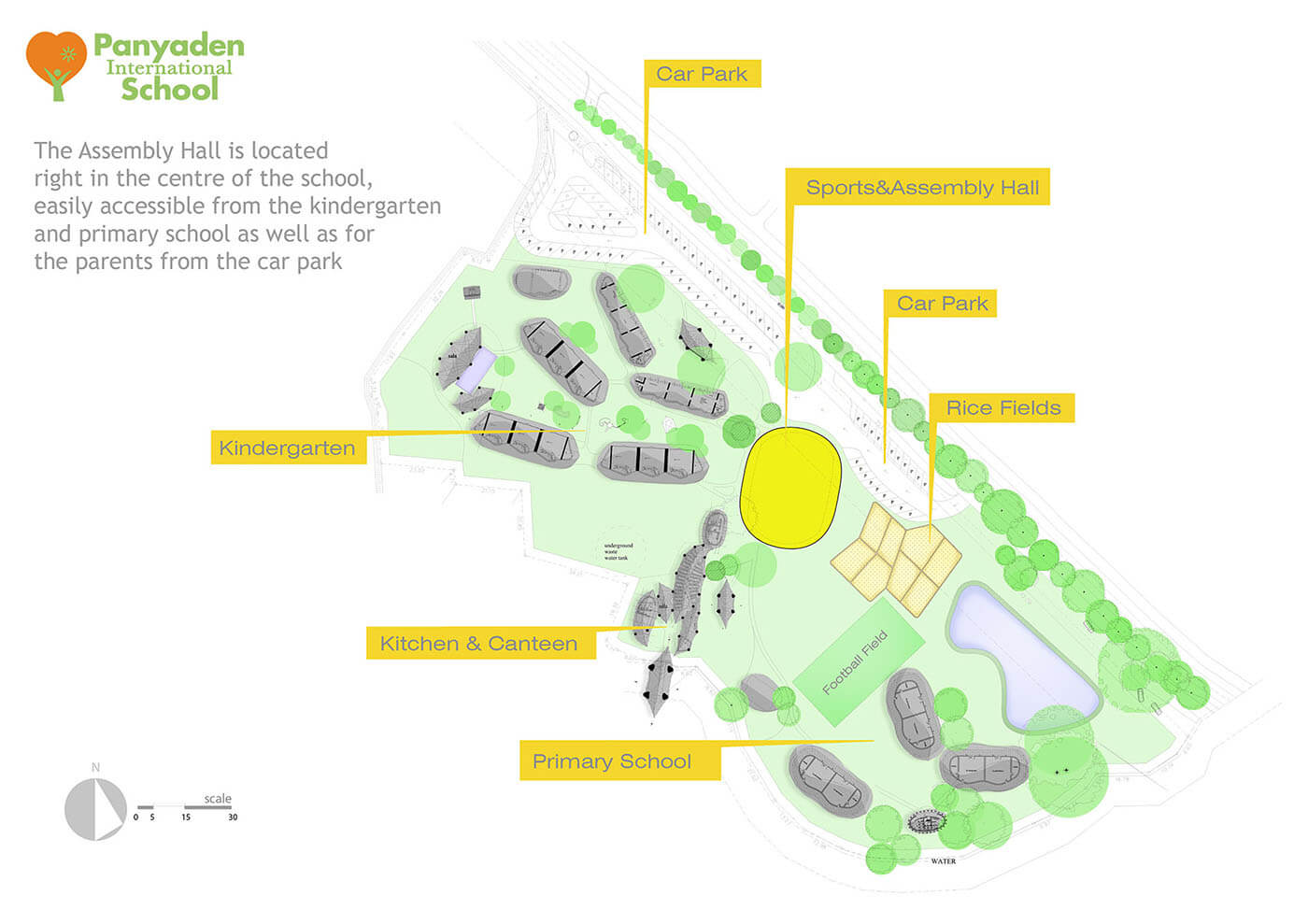 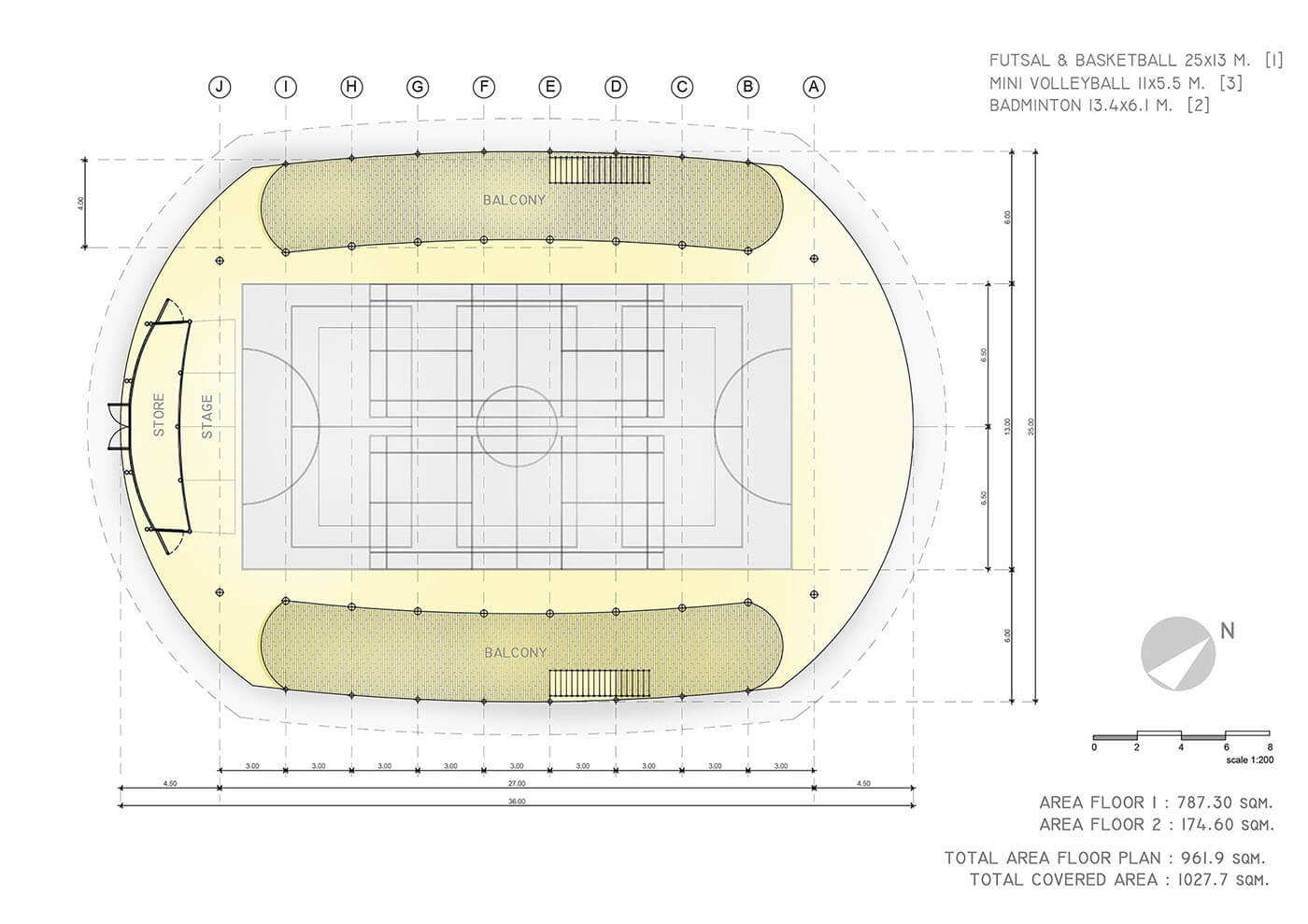 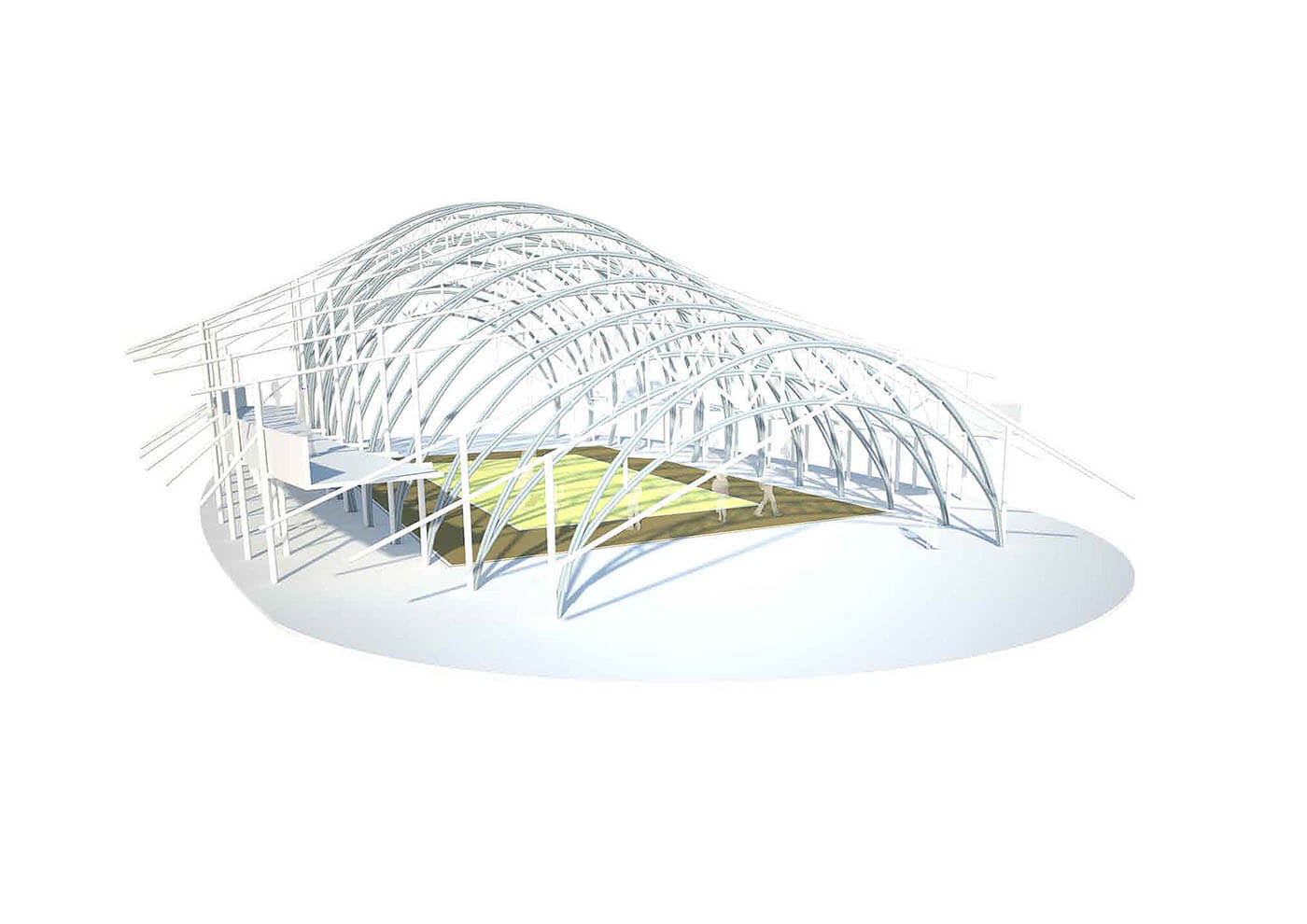 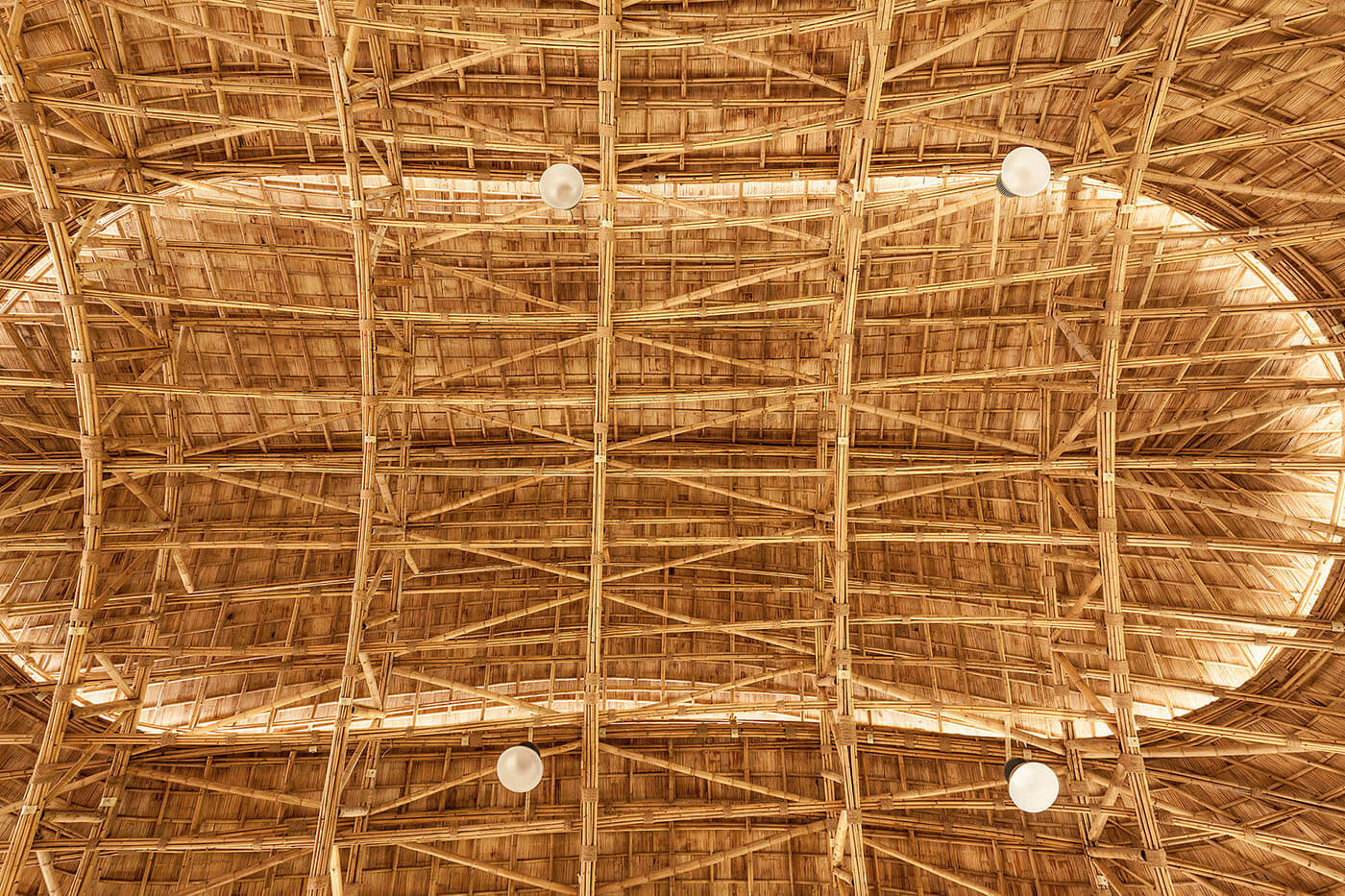 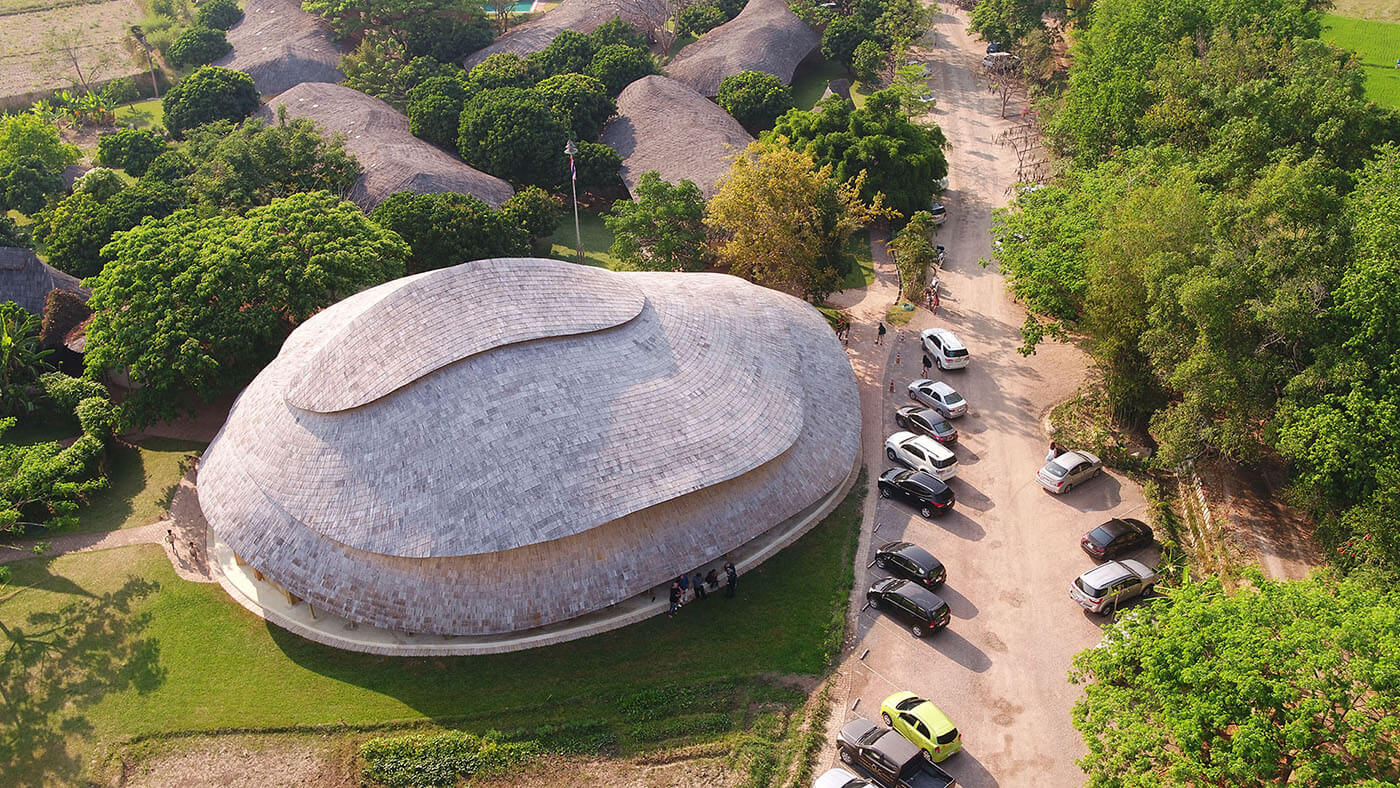 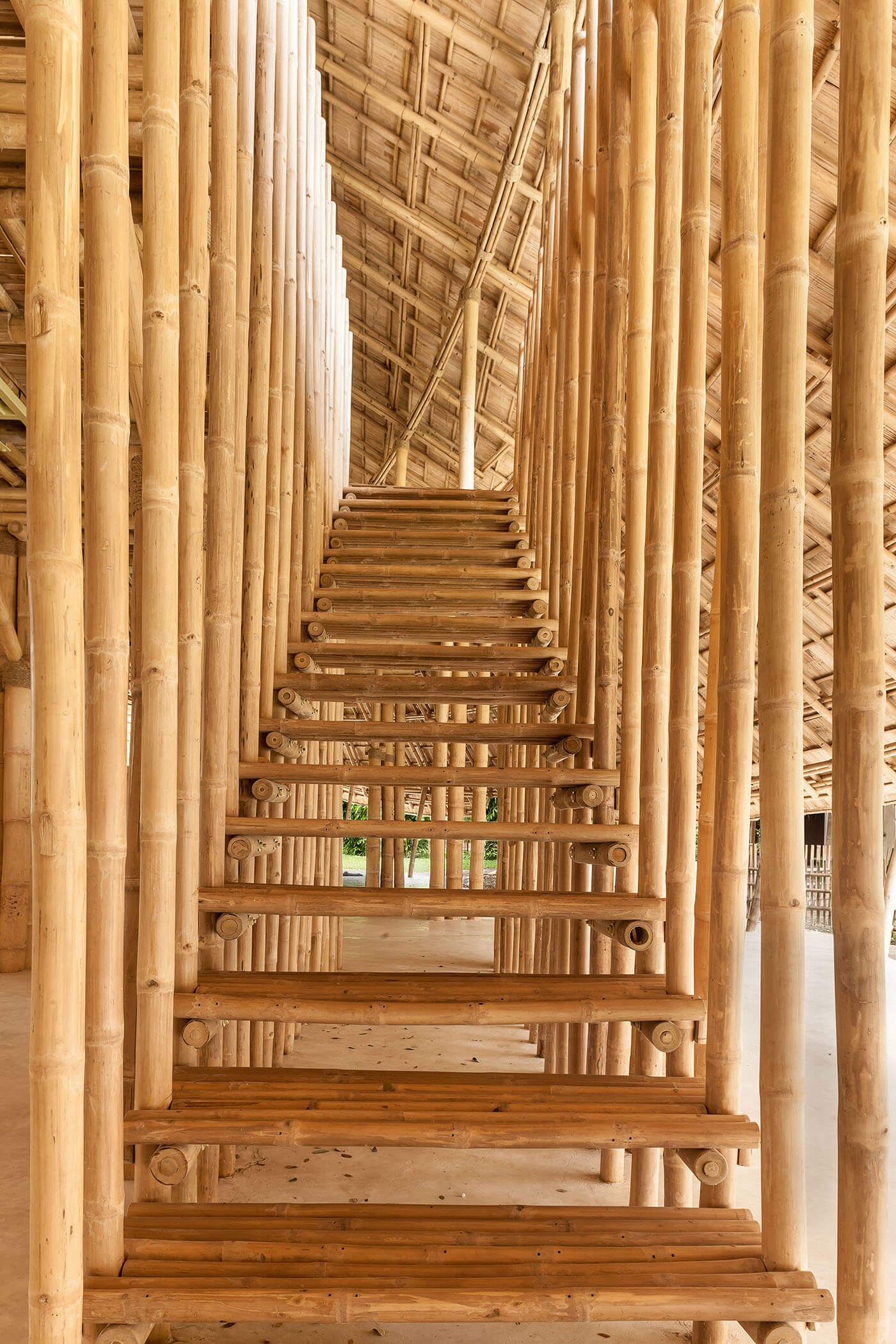 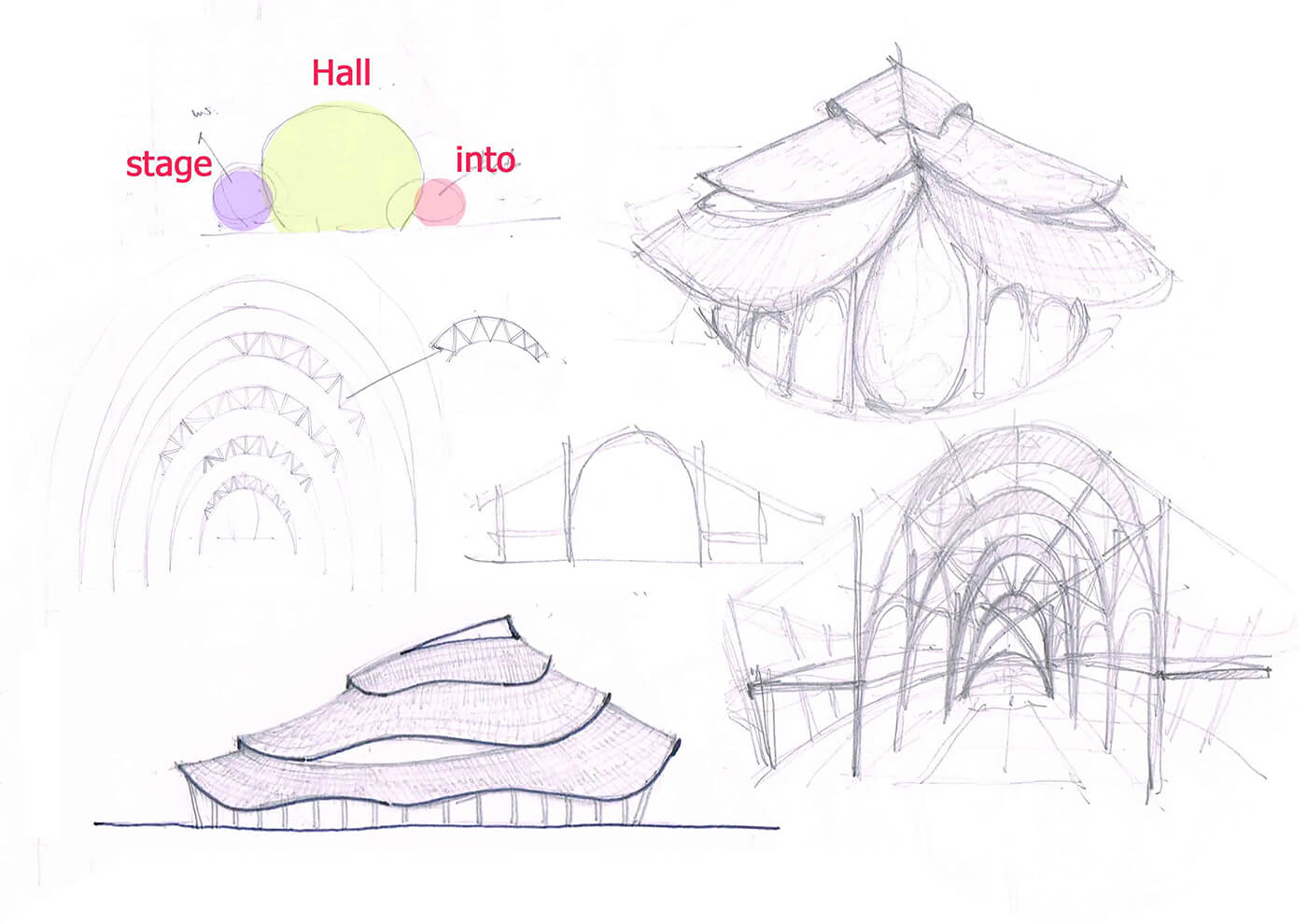 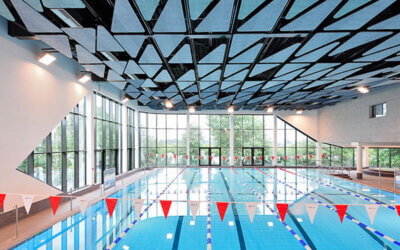 Indoor swimming pool and district administration under one roof. 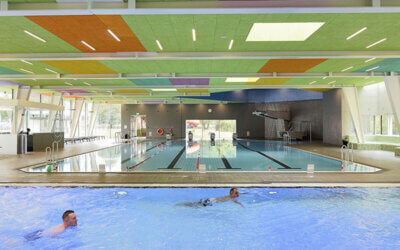 The swimming pool of the future

It is all about architecture, financing, digitalisation and users’ behaviour. 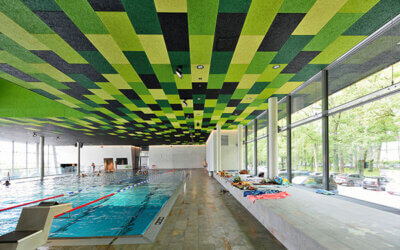