Mrs. Ada Crew founded Dunalastair (Alexander’s Fort) in 1937, as a bilingual school that offered a British type of education. The School’s name is taken from the once residence, and still burial ground of the chiefs of Clan Donnachaidh, in Perthshire, Scotland. The clan is one of Scotland’s oldest, and dates back to the time of Scottish unification. Its name (Sons of Duncan) can be traced back to the king that, in Shakespearean lore at least, was murdered by Macbeth. The clan’s motto, Virtutis Gloria Merces, has been the School’s since its foundation, and means glory is the reward for valour. 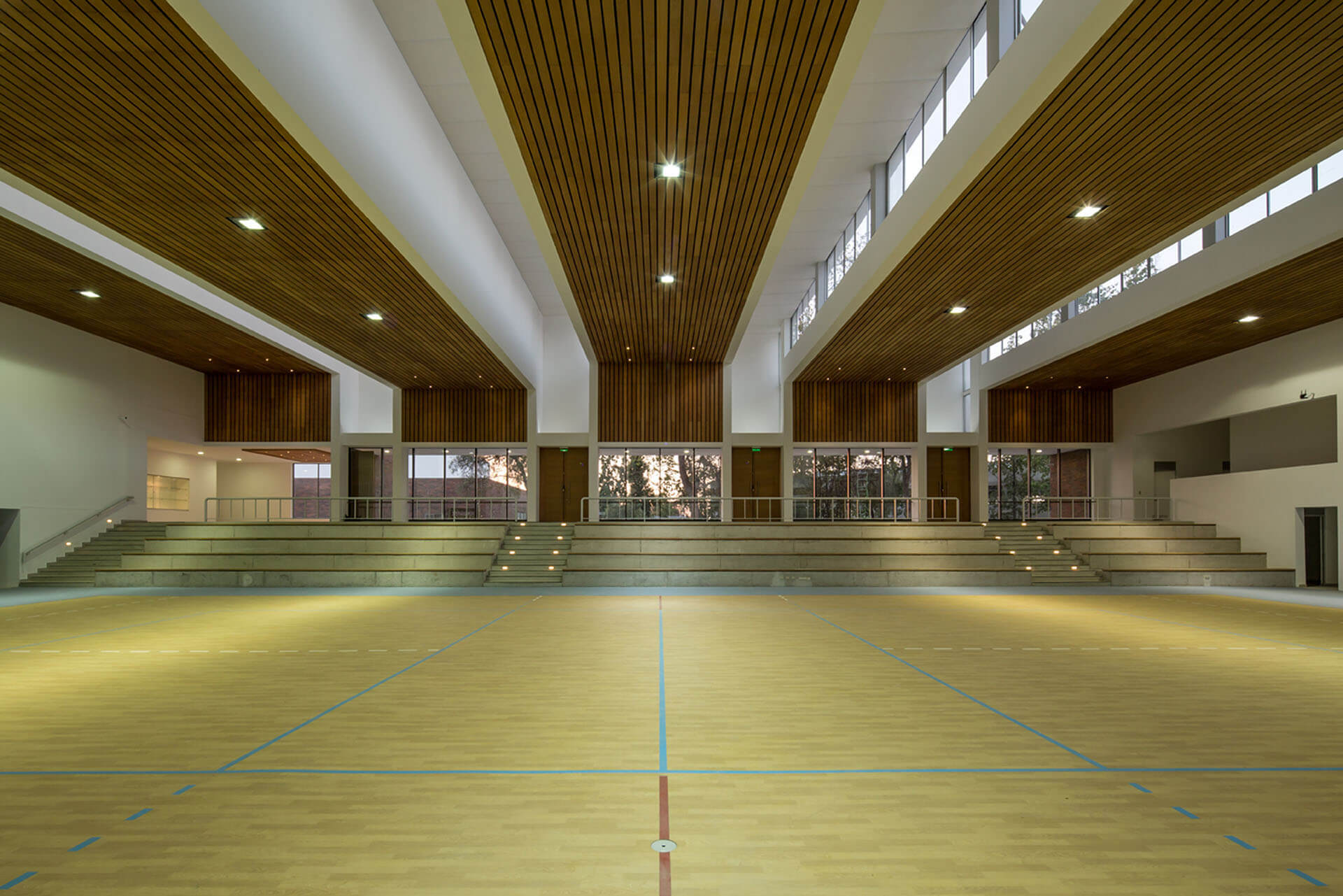 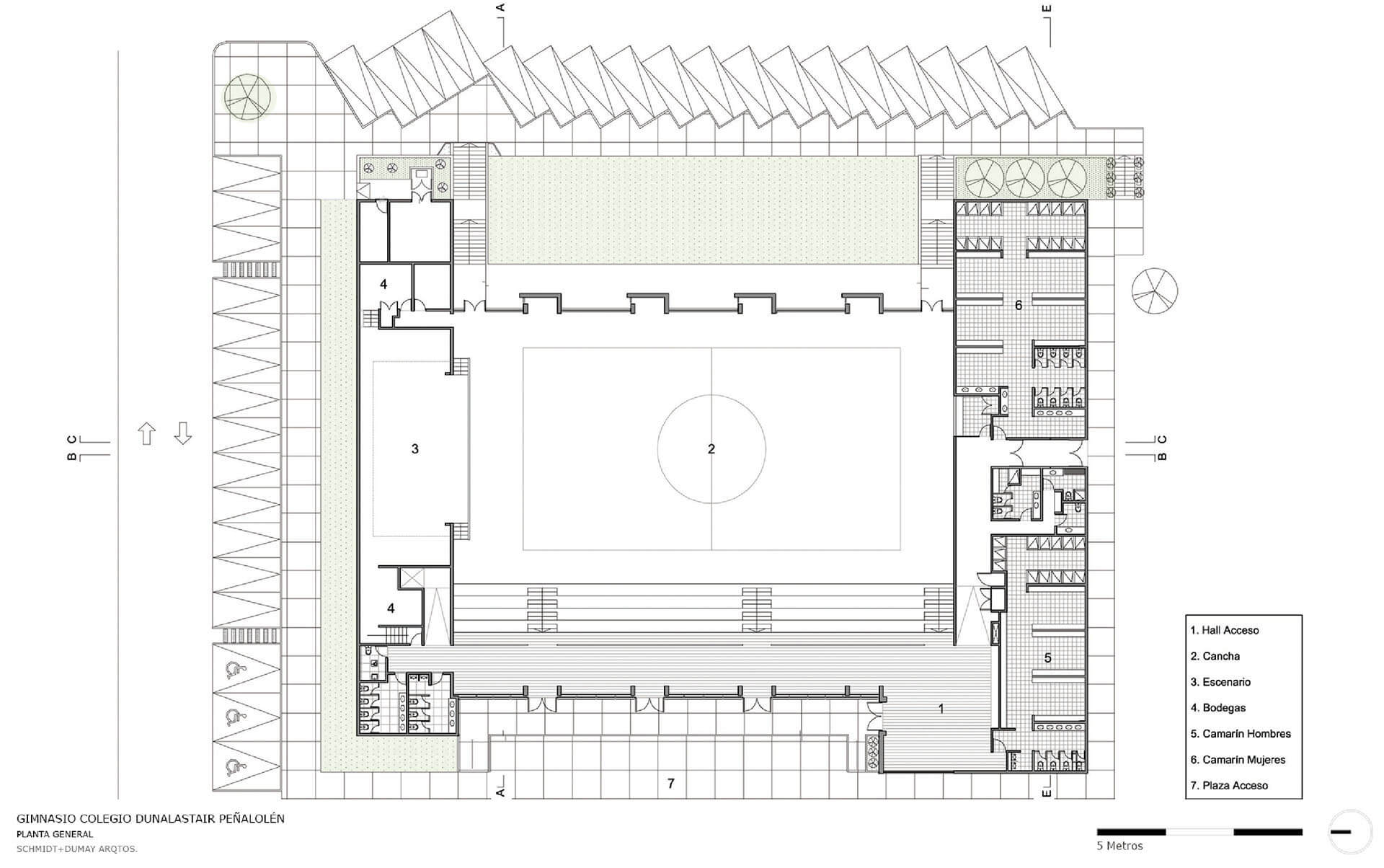 The working plan of Dunalastair British School gymnasium consists in designing and developing a building dedicated mainly to indoor sport activities but also suitable for cultural events such as concerts and stage plays. The whole project, totaling an extension of  22,300 sq. ft.,  will encompass a multi activity field with bleachers for 300 spectators, dressing rooms, storage rooms and an infirmary.

The gymnasium has been built in a piece of land with a 7% slope which, considering the size of the construction, results in a considerable difference in level.  For this reason, it has been decided to sink the construction to minimize the volumetric impact in relation with the surrounding landscape. 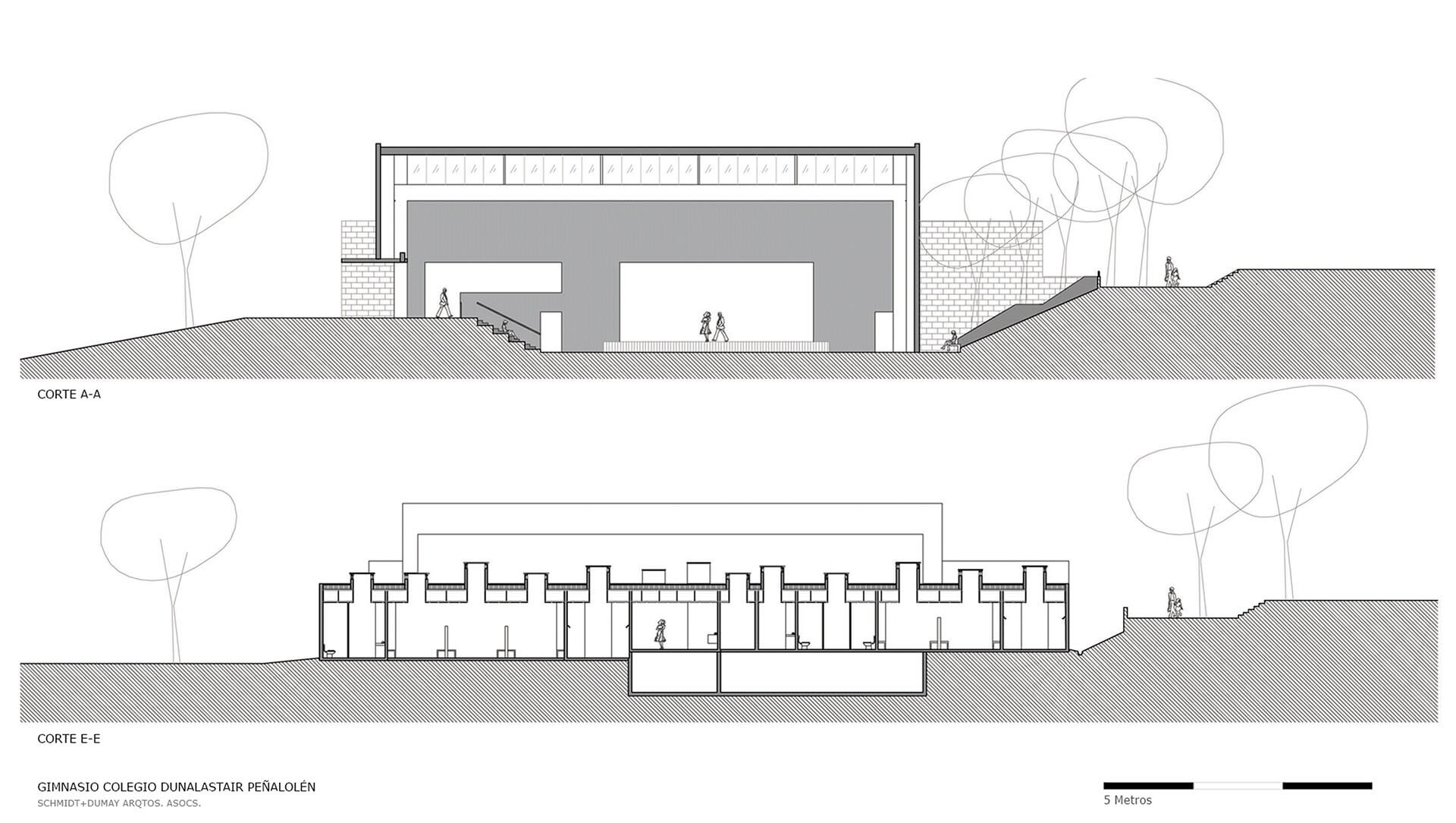 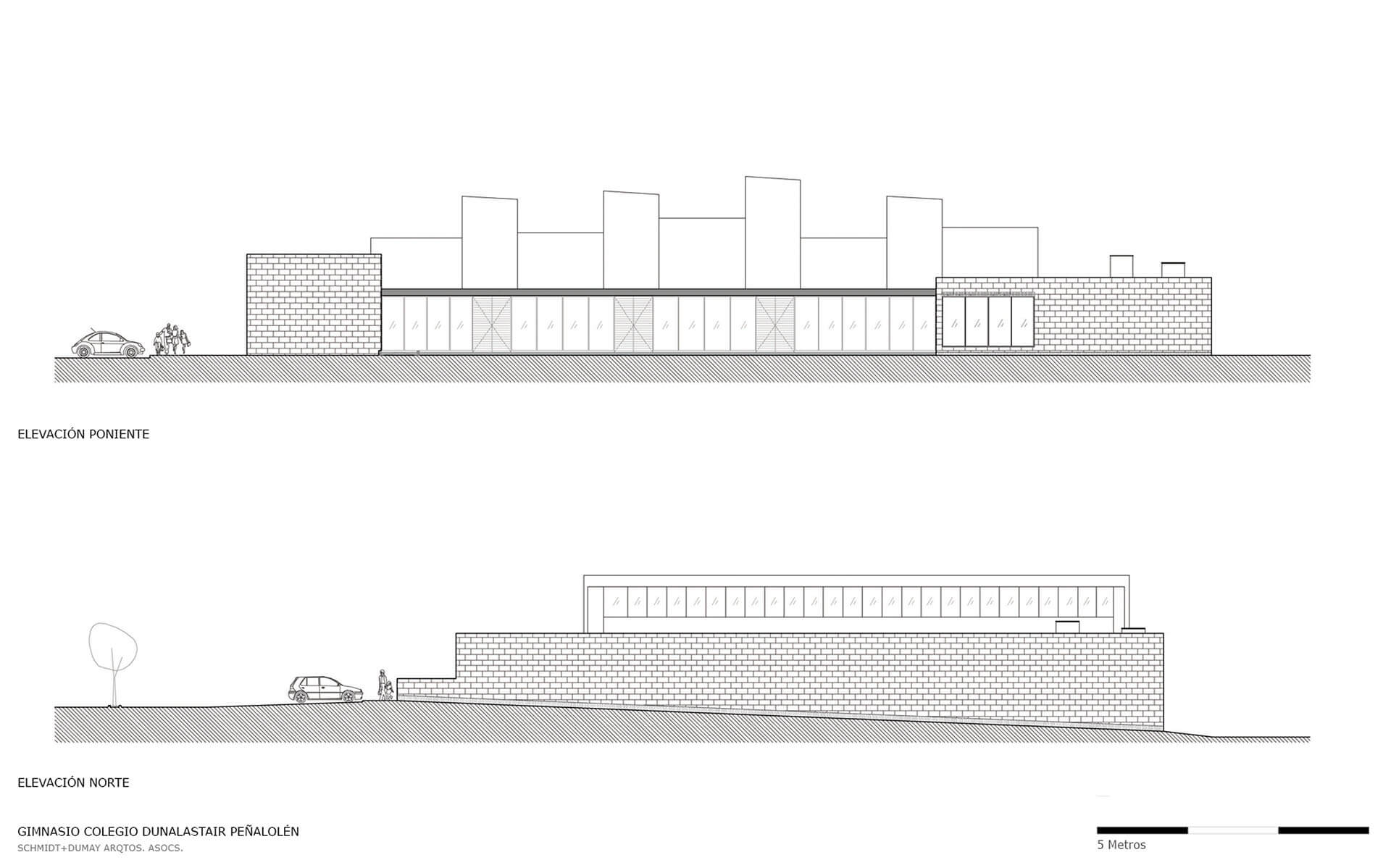 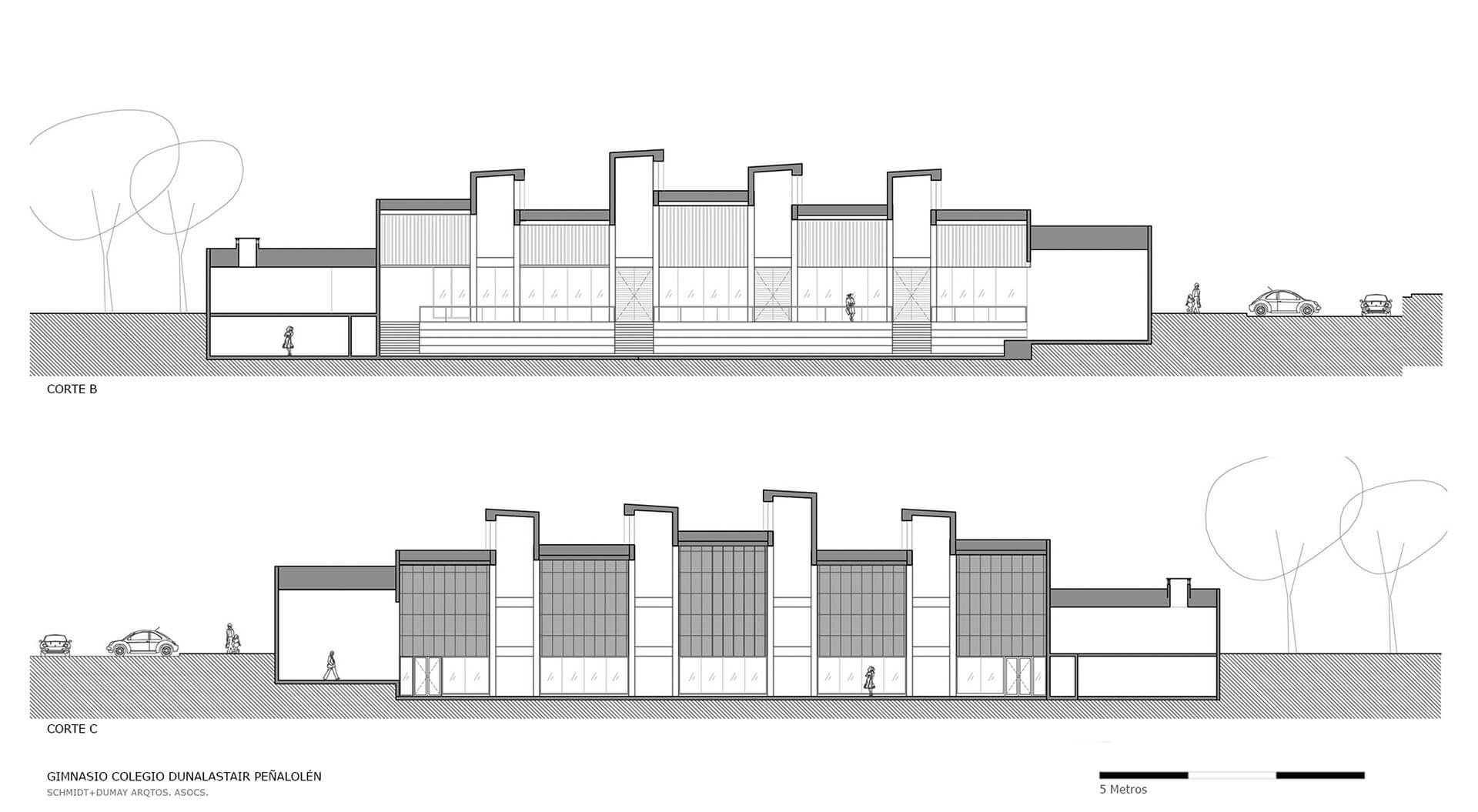 Dunalastair British School gymnasiumconsists of two concrete volumes (invested with bricks) at each end,  making up the most hermetic space of the structure, holding the stage, toilets and storage rooms at one end, and the dressing rooms at the other end.  A lighter structure in between, holding the playground and bleachers, is totally accessible from the school. 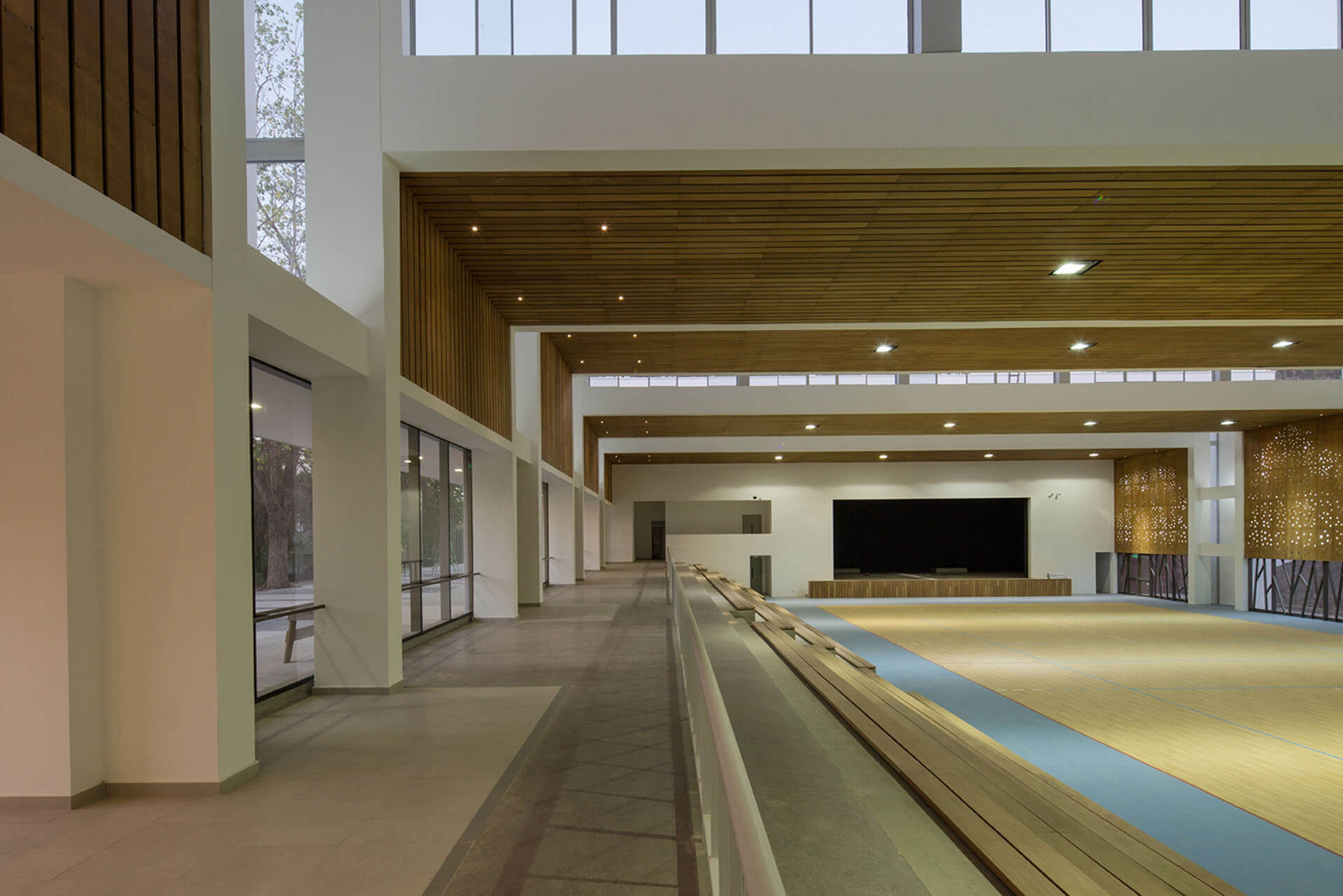 One of the main objectives is to allow natural light to infiltrate all the premises, thus reducing energy consumption to a minimum.  This has been accomplished by different ceiling levels, using metal trusses 6.5 feet tall by 92 feet in length as dormers. The resulting geometry of this structure improves the acoustics of the space and, at the same time, provides a greater spatial amplitude.

Due to the multi-purpose use of Dunalastair British School gymnasium it was necessary to improve the insulation and acoustics of the premises by using an interior finishing with MDF boards, veneered with natural wood, in 2 different formats:   a) On the ceiling, through the original modulation of the manufacturer in 6 x 100 inches strips, 1” apart,  lined with an acoustic insulation fabric in the inner side, in order to reduce resonance, and   b) on the walls, 2 x 4 feet panels drilled with holes of different diameters that would let the light get through, with the same acoustic objective but aimed to simulate an interior vegetal landscape as well, therefore providing an atmosphere connected to nature. 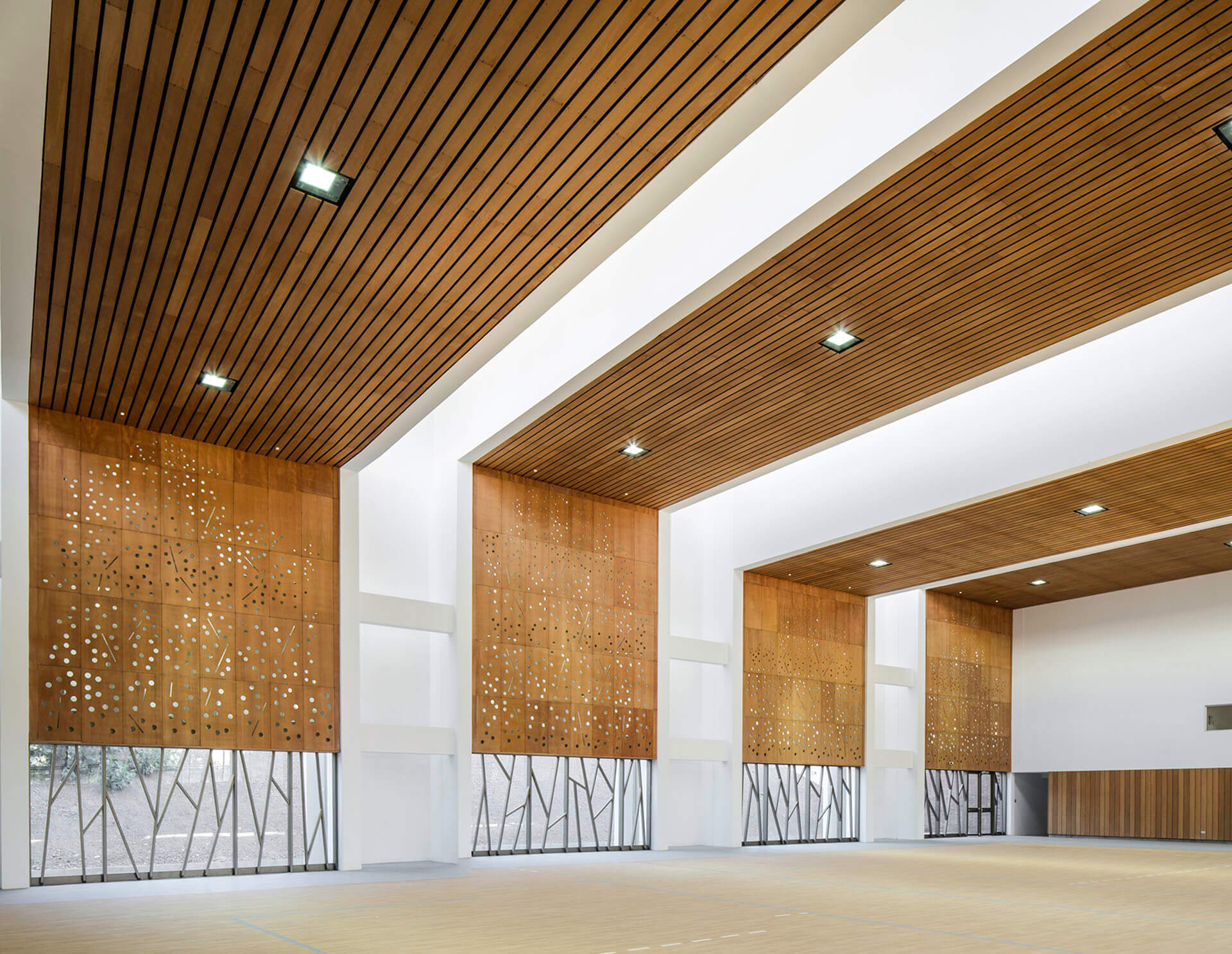 Durch die weitere Nutzung der Webseite stimmen Sie der Verwendung von Cookies zu. By continuing to use the website, you agree to the use of cookies. Weitere Informationen/More information