The new Stade de la Tuilière is located in Northern part of the city of Lausanne, at the point where the city’s dense urban fabric gives way to the more open countryside.

The sports infrastructure at the new “Centre sportif de la Tuilière” comprises nine football pitches, arranged in two rows, in addition to an athletics facility with a training centre. The stadium picks up on the idea of the slightly offset rectangular pitches, taking it even further. Positioned at a slight angle to the training pitches, the stadium square is orchestrated to form the city-side entry point to the sports campus.

The Stade de la Tuilière is intended exclusively for football matches and major events, with no peripheral uses. Its limited deployment and its location on the outskirts of the city permit a design focused fully on the stadium as a sports facility.

With its distinctive, unforgettable structure, it serves as a carrier of identity and memories. Its architecture emotionalises with the steep stands bringing spectators right up to the action on the pitch and the low roof amplifying the background noise of the chanting fans. The architecture thus contributes in no small way to boosting the team’s home advantage through its structural measures. The building, history and identity of “FC Lausanne-Sport” are all to merge into a single whole.

Folding back the four corners of the stadium enables the design to be tailored to the confined space on the site. The ingenious corner solution permits a generous free flow of visitors around the building at ground-floor level, linking the stadium square to its surrounding areas. At the same time, it creates a covered public space to serve as a go-between, reconciling the outside with the inside and the city with the football stadium. The corners simultaneously serve as entrance areas, providing initial glimpses of the pitch and allowing the atmosphere in the stadium to be already savoured from the outside.

The folded back corners also lend the stadium the impressive, unmistakeable and even iconic look of a convex vessel, indicative of its use and what lies within.

A place of anticipation

The ancillary functions on the ground floor, which include catering, circulation and lounge zones, from the surrounding area, have been integrated into the building.

The inner shell Is shaped by the geometry of the stands. “Mouth holes” cut out of the stands provide access to the innermost zone. The space between the two shells is like a resonance box, amplifying the happenings on the pitch: a place of anticipation, exchange and encounters.

The pitch takes over

While the stadium boasts with a spectacular exterior and splendid views from its intermediate zone, the lines on the inside exude tranquillity. It is the pitch and the protagonists acting on it that take over the dramaturgy here. Nothing which could cause distraction was added, even the seating rows run horizontally round the corners.

The vomitories emerging from the inner shell blend into the picture almost completely calm. Even the business and VIP zones are matched to the geometry of the seating. Everything is in servitude to the stadium’s purpose: the game.

On the outside, the geometry of the beams and the underside of the stands dominate the stadium on three sides. The west side, by contrast, houses the main stand with its specific uses. The various cloakrooms, press and VIP zones are visible over three floors through a filigree glass skin.

Gentle creases between the vertically configured strips of glass enhance the impression that this façade is just a light glass curtain. Its fragmented reflections break up the vast scale of the building. This entire complex not only serves as a backdrop to a new city square but also creates a prominent new address for the city of Lausanne. 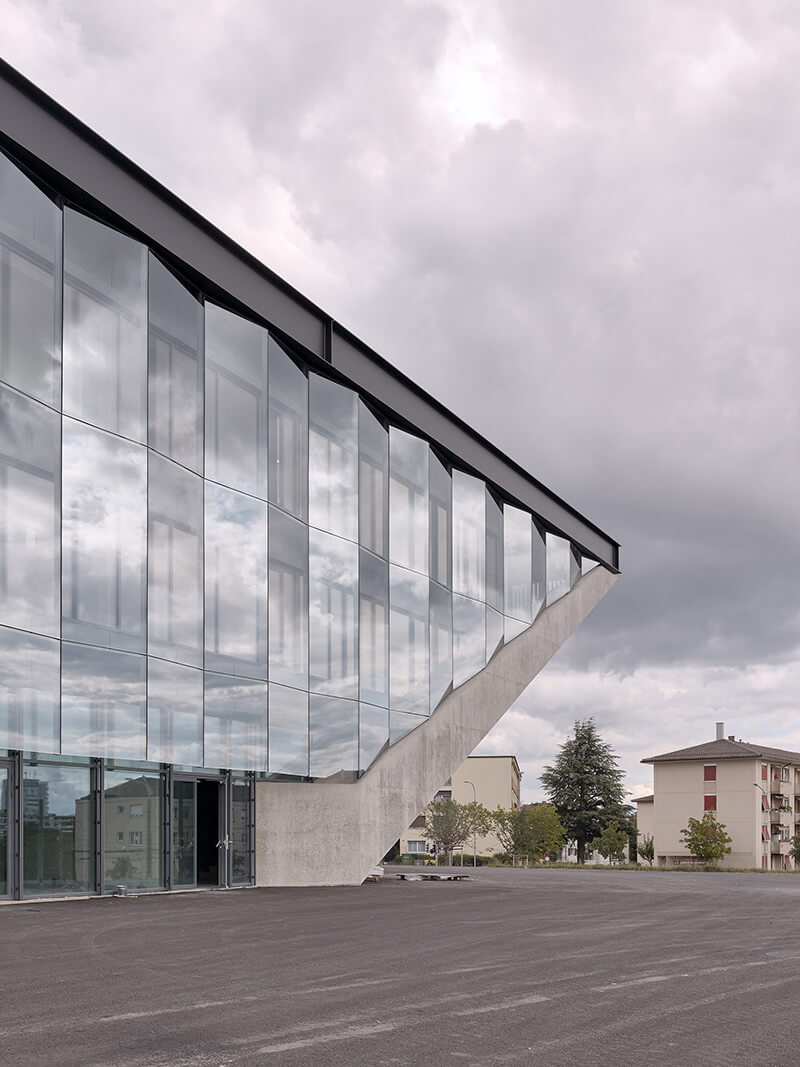 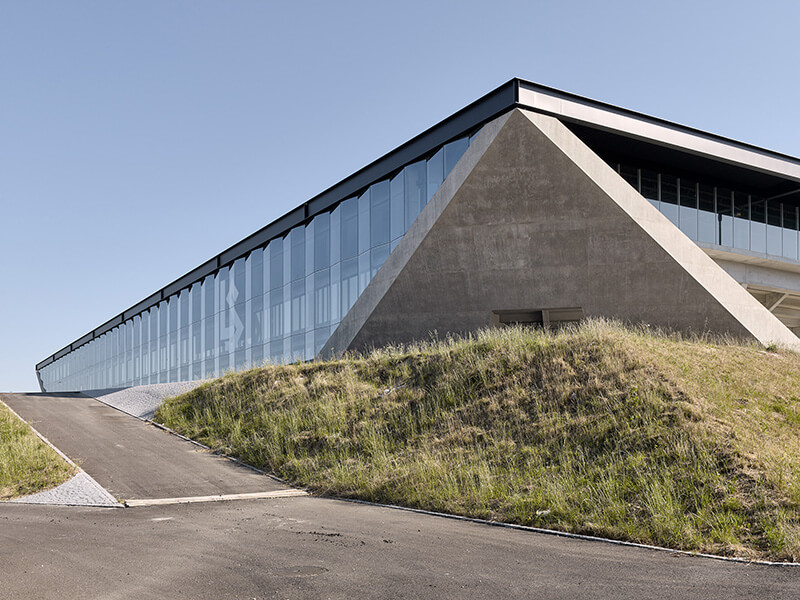 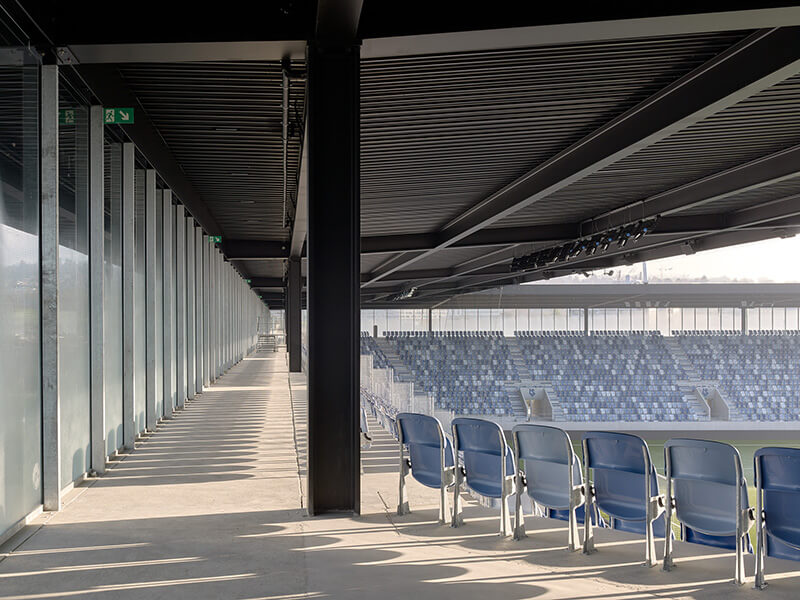 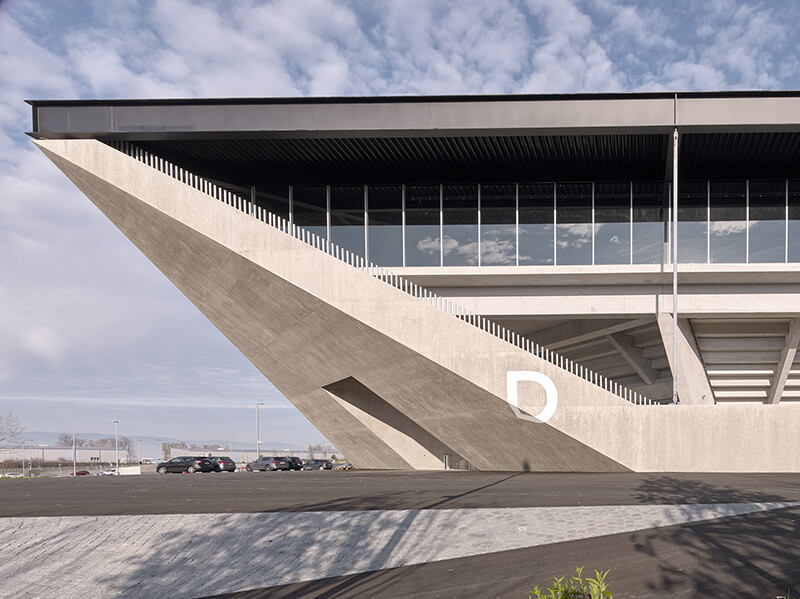 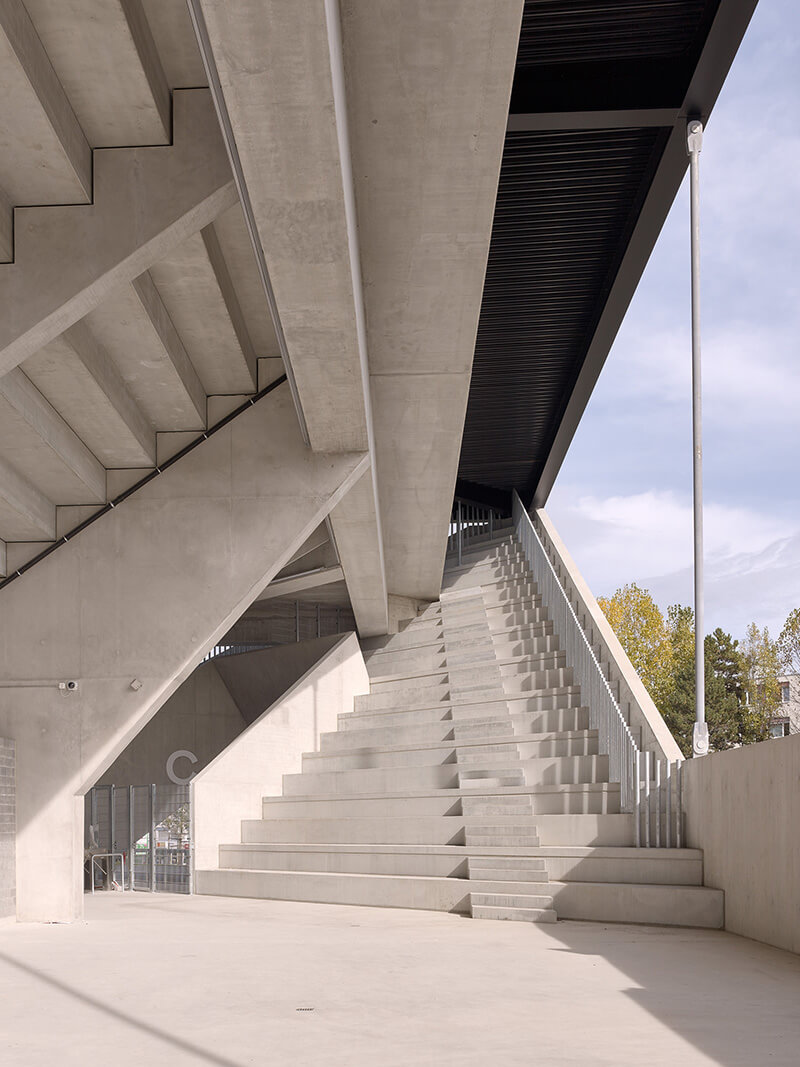 Simply leave your e-mail address and we will regularly send you news and beautiful projects from the world of sports and leisure facilities.

How can we be helpful?